You are here: Home / MidEastGulf / Islamic State on the offensive in Iraq’s Anbar region 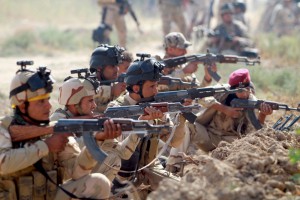 ISIS has launched attacks on multiple fronts in Iraq’s western province of Anbar, in its latest attempt to retake the initiative on the ground, sources on both sides said.

Jihadi fighters gained fresh ground in the provincial capital Ramadi during the past 48 hours, also launching attacks near Fallujah and taking over the small town of Jubbah in western Anbar.

An assault launched late Thursday left the government’s claim to Ramadi hanging by a thread again, with ISIS fighters advancing to within meters of the provincial headquarters.

“Police, army forces and tribal forces are defending the city as we speak to prevent ISIS from taking over entirely. Iraqi and coalition aircraft are in support,” he said.

He and other officials said a large number of civilians were fleeing the city center, the second time in a month they have done so following another ISIS offensive in April.

“Families are trying to flee on foot, leaving their cars and homes behind, but most areas around Ramadi are under ISIS control,” said Sheikh Jabbar Adjadj al-Assafi, a tribal leader.

ISIS said it had carried out several attacks on army positions east of Ramadi, including one by a British suicide bomber it named as Abu Musa al-Britani.

“Another vehicle driven by our brother martyr Abu Khobayb al-Shami attacked the Al-Majd police station near Al-Haq mosque in Ramadi, followed by an assault that killed who was left,” the group said in its daily radio broadcast.

It also claimed to have killed 13 Iraqi soldiers in an attack on a hill east of Ramadi and executed 14 Sunni tribal fighters when it took over the central neighbourhood of Jamiya.

Iraqi security sources and IS confirmed that the town of Jubbah, about 180 kilometres (110 miles) northwest of Baghdad, had been taken over by jihadists.

A tribal leader said the town, which is near the large airbase of Al-Asad where several hundred U.S. advisers are stationed, had been left insufficiently protected.

Both sides also reported several attacks east of Fallujah, only a few miles from the borders of Baghdad governorate, since Thursday but their outcome remained unclear.