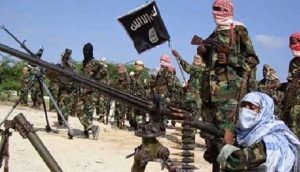 The Nigerian Army has raised an alarm over the commencement of massive recruitment by the Islamic State of West African Province, ISWAP, a terrorist group, like reported by dailypost.ng.

Brig. Gen. Onyeama Nwachukwu, the Director, Army Public Relations, disclosed at the headquarters of the Theatre Command, Operation Hadin Kai Maimalari, during a tour in Maiduguri, Borno State, on Sunday.

Nwachukwu wants members of the public to be on the lookout within their immediate environment, adding that it was very important to engage media organizations to block ISWAP’s recruitment.

The Army spokesperson also revealed that the Boko Haram insurgents have been surrendering.

Nwachukwu said, “I will like to mention that the ISWAP, very recently, has been depleted by the surrendering of their members, as well as a conflict between them. They’ve embarked on what I will call a massive recruitment drive and I consider it very important to engage the media to block this recruitment.