You are here: Home / Europe / Islamic State of Russia or Caucasus Emirate? 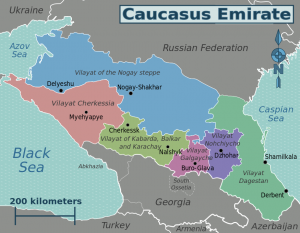 While the world concentrates on Syria and Iraq, the Islamic State (ISIS/ISIL) inches closer to Russia’s North Caucasus region. Militants in Dagestan, Chechnya, Ingushetia, and Kabardino-Balkaria declared allegiance to the terrorist group.

“Obeying the order of Allah… we are declaring our allegiance to Caliph Ibrahim ben Awwad ben Ibrahim al Badri al-Qoureishi al Husseini for obedience and subordination,” the recording in both Arabic and Russian says, referring to Abu Bakr al-Baghdadi.

“We testify that all mujahedeen of the Caucasus… are united in this decision and there are no disagreements among us on this issue,” the male voice says, listing the four Russian regions.

ISIS welcomed the news of the new allegiance in an already volatile region.

The establishment of an ISIS governorate called Wilayat Qawqaz means the radical Islamic group will top al-Qaeda as the world’s largest terrorist group. It will also challenge the al-Qaeda affiliate the Islamic Emirate of the Caucasus, which formed in the region in 2007. From the Institute for the Study of War:

ISIS has been setting conditions to establish this governorate in support of its regional expansion campaign since at least January 2015. ISIS’s statements and actions over the next few weeks will indicate whether the organization intends to launch operations through its new Caucasus affiliate, or whether it simply intends to use the pledge as an opportunity to assert its global vitality and reach.

Over 2,000 Russians traveled to Iraq and Syria to join ISIS in the past year, mostly from Chechnya. In September, ISIS released a video of a Russian jihadist. He vowed ISIS will liberate Chechnya and the North Caucasus from Russia. The group strongly opposes Russian President Vladimir Putin providing aid to Syrian President Bashar al-Assad.

The Islamic State allegedly shot the video at an airport in Raqqa after they seized control from the Syrian Army. A Russian speaker describes the jets and military equipment to the IS fighters. He confirms it all came from Russia.

“This message is for you, Vladimir Putin!” said the fighter. “These are the aircraft you sent to Bashar [Assad], and we’re going to send them to you. Remember that!”