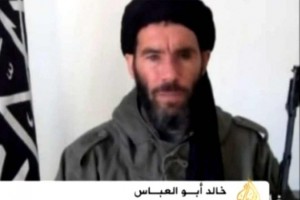 The notorious Mokhtar Belmokhtar (aka Mr. Marlboro) hit the headlines yet again this week, after his group the Mourabitounes released an audio message pledging allegiance to the Islamic State (Isis).

Belmokhtar immediately released his own media statement, claiming that this was in fact not true. But a day later, on 19 May, the group’s co-leader Adnan Abu Walid Sahraoui released yet another audio message proclaiming that they now held a European hostage, a Romanian, and ended with a repeated pledge of allegiance to the Islamic State.

Clearly the Mourabitounes are falling along the same Islamic State fault lines that many other traditionally Al-Qaeda-aligned groups are experiencing – whether to abandon AQC’s weakened leadership or to team up with the more successful Islamic State.

Libya is the Perfect Stronghold

Belmokhtar was the mastermind of the brazen 2013 attack on the British Petroleum (BP) gas refinery in the southeastern Algerian site of In Amenas, famous for taking at least 570 people hostage, both Algerians and foreigners, in a four-day standoff.

Mr. Marlboro, already a hero to the North African jihadist community, solidified his hero status after the success of the In Amenas attack, winning the hearts of jihadists no matter whether they were aligned with Al-Qaeda or Isis.

It is commonly known that Mr. Marlboro has been residing in Libya for well over a year; what is less commonly known is that he is there under the protection of Ansar al Sharia in Libya. The combination of a multitude of militant groups, well established and organised criminal networks, and the general lawlessness of the area, places Libya in an ideal position both logistically and ideologically for the global jihadi cause.

Libya’s significance to groups like the IS is not founded in how much territory any specific group controls or how many fighters are present in those groups, but rather in the absence of any form of governance. This vacuum enables IS to coerce support, establish safe havens, create supply networks, and engage in organised criminal activities, such as human smuggling, at will.

The rate of refugees coming from Libya to the European Union is alarming, and presents Libya as a very unique two-fold threat, both regionally (further destabilising North Africa) and transnationally (on the shores of the EU).

The growing threat to Europe through the illegal migration form North Africa (most notably Libya) to the shores of Europe (most notably Italy), combined with IS inroads into Libya, makes the fragile nation a complex double threat. The confusion over the true allegiance of the Mourabitunes belies the larger problem that Libya poses in general. The Romanian hostage situation demonstrates the willingness and ability of the group to target Europeans. It is not beyond the imagination of IS to send full boats carrying its operatives disguised as refugees.

Unchecked refugees sailing off Libyan shores can no longer be ignored as a security concern. Until the authorities are sure that those who disembarked on European soil are genuine refugees seeking a better life and not to implement terrorist schemes, the refugees will be a worry.

IS has vocally threatened Europe many times, but specifically highlights Libya’s convenient proximity to Europe in the recent Coptic Christian execution video entitled: A Message Signed with Blood To the Nation of the Cross. The executioner warns “And today we are on the South of Rome on the land of Islam, Libya, sending another message” minutes before orchestrating the mass simultaneous beheadings.