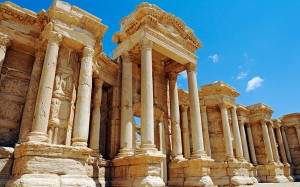 Islamic State fighters seized around a third of the ancient Syrian city of Palmyra on Wednesday after heavy clashes with the military and allied combatants, the Syrian Observatory for Human Rights monitoring group said.

Islamic State fighters advanced towards the city, known as Tadmur in Arabic, over the weekend but were repelled.

The city is home to a UNESCO World Heritage site and Syria’s antiquities chief has said the insurgents would destroy ancient ruins if they took control of it.