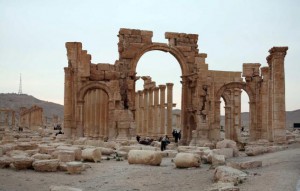 Islamic State has planted mines and bombs in the ancient part of the central Syrian city of Palmyra, home to Roman-era ruins, a group monitoring the war said on Sunday.

The Syrian Observatory for Human Rights said it was not immediately clear whether the group was preparing to destroy the ancient ruins or planted the mines to deter government forces from advancing towards the city, also known as Tadmur.