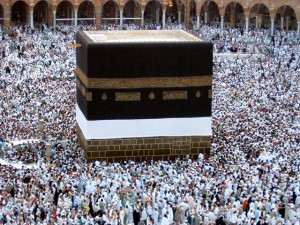 From the battlefields of Iraq and Syria, the terror group known as the Islamic State is preparing yet another front in its quest to reestablish an Islamic caliphate, this time hoping to wrest Saudi Arabia from a royal family that has long maintained its grip on power.

Still, counterterrorism officials, former diplomats and analysts say the threat to Saudi Arabia from the Islamic State is one that cannot be dismissed.

“What they would really like to be able to do is penetrate into Saudi Arabia and take the holy cities of Mecca and Medina as the capital of their caliphate,” he added.

More than 20 people died in the attacks on May 22 and May 29, and a recording issued by the Islamic State’s Saudi branch at about the same time called for more bloodshed.

“You must all come to burn the thrones of the tyrants,” it said, according to the U.S.-based SITE monitoring center.

U.S. counterterrorism officials say such threats are in line with other Islamic State propaganda, which has often tried to incite attacks against Saudi authorities and which has claimed responsibility for shootings targeting Saudi police and Westerners.

“The group’s apparent attempts to establish cells inside Saudi Arabia would be consistent with their strategy,” a counterterrorism official told VOA on condition of anonymity.

Whether the Islamic State has the wherewithal to follow through, however, remains a question. By most accounts, the group’s presence in Saudi Arabia is small. Its sympathizers have also come under heavy pressure from Saudi authorities, who in April announced the arrests of 93 suspects, 65 of them Saudi citizens.

“ISIS, though it has a small presence in Saudi Arabia, is doing what it can to launch spectacular, explosive attacks that can incite sectarian tension and lead to internal strife,” said Harleen Gambhir, a counterterrorism analyst at the Institute for the Study of War.

Gambhir and others warn the presence may be even bigger due to Islamic State “sleeper cells” in Saudi Arabia and nearby Yemen.

Saudi Arabia has also been fertile ground for extremist groups, including the Islamic State, looking for jihadist recruits.

A study earlier this year by the International Center for the Study of Radicalization and Political Violence (ICSR) found that of the more than 20,000 foreign fighters thought to have gone to Syria and Iraq, 1,500-2,500 had come from Saudi Arabia. At the time, researchers said only Tunisia had been thought to have sent more fighters to the front.

Other analysts say the numbers may be even higher.

“We’re talking thousands of people, probably two- to three-thousand people from Saudi Arabia who have gone to fight for the Islamic State,” said Patrick Skinner, director of special projects at the Soufan Group.

“They won’t be able to topple anything but that’s not probably even what they want,” Skinner said. “They just want to keep picking at it until it’s a thousand cuts and the government overreacts and then they can kind of feed into some popular resentment.”

Unlike in Syria, Iraq and Libya, the Islamic State group will not be able to take advantage of a weak or non-existent central government. Current and former U.S. officials say Saudi police, intelligence and counterterror units are more than capable of cracking down.

“The Saudis really cleaned house for a while,” Skinner said. “The problem is, it’s such a dirty house that it’s near impossible to clean.”

Another part of the problem is the longstanding undercurrent of support for extremist thinking, especially among youth, combined with what had been a constant flow of funding for radical religious leaders who straddled the fine line between ultra-conservative teachings and extremist ideology.

Still, the temptation or pressure to restore that funding may be growing as Riyadh’s proxy war with rival Tehran becomes more intense, with some analysts warning the conflict is already causing many Saudi officials to view events in the Middle East through a Sunni-Shi’ite lens.

“As this clash between Iran and Saudi Arabia intensifies, I think it’s going to be pretty unavoidable that the Saudis are going to support the Islamic State or support militant groups that are under the Islamic State’s umbrella,” said Reuel Marc Gerecht with the Foundation for Defense of Democracies.