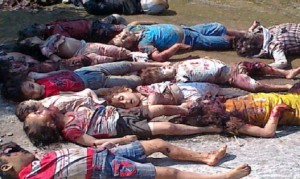 The vice president of the Anbar provincial parliament in Iraq, Falih el-İsavi, has said the Islamic State of Iraq and the Levant (ISIL) has executed 503 people, including civilians and soldiers.

“ISIL militants have executed 503 people, including soldiers and civilians, in Ramadi. The situation is in a critical position. The Baghdad government has sent supplementary military force to the region but this has not been in the anticipated level,” el-İsavi said.

He added that Ramadi, a city in the Anbar province, was now mostly under the control of ISIL militants and the situation was “worrisome.”

“For the security crises to be overcome, the [Prime Minister Haider] al-Abadi government needs to send more military forces to the region. Significant support is also needed from the coalition states,” el-İsavi said.

ISIL fighters seized the government compound in the city of Ramadi on May 15 and edged closer to what would be their biggest victory in Iraq this year, officials have said.