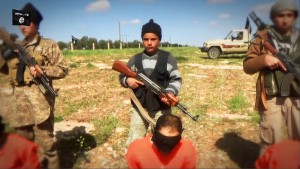 Militants fighting for the Islamic State in Syria have brutally murdered at least 30 civilians, including two children, following a raid on a regime-held village.

The Sunni extremists carried out a savage attack on the village of Al-Mabujeh in the central Syrian province of Hama earlier this morning, according to a monitoring group.

ISIS ‘executed at least 30 people, including women and children, by burning, beheading, and firing on them’ in the village of Mabujeh, said Rami Abdel Rahman, director of the Britain-based Syrian Observatory for Human Rights.

The Al-Mabujeh massacre took place earlier this morning as ISIS militants launched a massive offensive in the area, beginning near the Youth Housing Camp.

The attack began at around 2.30am and saw multiple checkpoints come under attack before the jihadis managed to seize control of the National Defense Force positions at around 6.45am, according to Al-Masdar News.

From there it is understood the militants set about massacring the local population.

The attack comes just days after a video released by ISIS showed its bloodthirsty fighters cutting off the heads of eight men it claimed were Shiite Muslims. That video is also understood to have been filmed in the province of Hama.

In the video, the men, wearing orange uniforms with their hands tied behind their backs, were led forward in a field by teenage boys. They were then handed over to a group of IS fighters. A boy wearing a black uniform hands out knives to the fighters, who then behead the hostages.

An ISIS fighter speaks in the video, using a derogatory term for Shiites and calling them ‘impure infidels.’ He adds that the current military campaign against ISIS will only make the militant group stronger.

‘Our swords will soon, God willing, reach the Nuseiries and their allies like Bashar and his party,’ the man said referring to Syrian President Bashar Assad and Lebanon’s militant Hezbollah group that is fighting on his side.

The word Nuseiry is a derogatory term to refer to Assad’s Alawite sect, an offshoot of Shiite Islam.

The news comes as the Observatory and local activists said Syrian government forces fired carried out airstrikes and fired surface-to-surface missiles on the rebel-held city of Idlib, killing at least 14.

The attacks come amid fears that the government is preparing to retake the city that it lost on Saturday.

Idlib, with a population of around 165,000 people, became the second provincial capital to fall to the opposition after Raqqa, which is now a stronghold of the Islamic State group.

Its capture by several factions led by the Al Qaeda-linked Nusra Front underscores the growing power of extremist groups in Syria, which now control about half the country.

Yesterday Canadian legislators voted to back the government’s plans to bomb ISIS positions in Syria, a move that opposition parties say threatens to drag Canada into a long war.

The Canadian House of Commons approved the plan 142-129. The result was never in doubt, since the ruling Conservatives have a majority in the chamber. The vote also approved the extension of Canada’s six-month mission by a year to the end of March 2016.

Canada has around 70 special forces troops in northern Iraq and six Canadian jets are taking part in U.S.-led bombing attacks against Islamic State in Iraq.