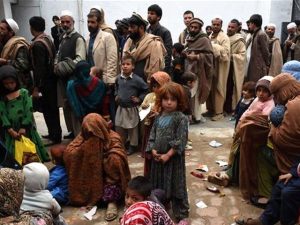 A recent report published by the United Nations reveals that insurgent groups are involved in human smuggling for the purpose of sexual slavery and forced labour.

Nikki Haley, US ambassador to the United Nations said Taliban and IS are involved in human smuggling, TOLO news reported.

“As noted in the Secretary General’s report, victims of trafficking by violent extremist groups like IS and the Taliban suffer from particularly severe trauma,” she said.

“Not only is the United States fully committed to the complete defeat of these violent extremist groups, but we join you in complete commitment to helping those victims.”

The session also called for more pressure to be put on terrorists groups, including sanctions.

Matthew Rycroft, Permanent Representative of the United Kingdom to the United Nations said, “The nature of today’s conflict has encouraged growth of armed groups, terrorists and powerful criminal networks. They all thrive in the absence of rule of law and they profit on an unprecedented scale from the chaos of ungoverned spaces.”

“We have witnessed that anti-government armed militants in Afghanistan are involved in this respect by using the security and safety gaps and unfortunately they use children for war purposes and their operations. We have heard from media that they (terrorist groups) have misused and sexually abused children. These acts are condemned by the (Afghanistan Independent Human Rights) commission,” said Bilal Seddiqi, spokesman for Afghanistan Independent Human Rights Commission.

The United Nations Security Council in the report reiterated its condemnation of human trafficking.

The Security Council further reiterated its condemnation of trafficking of people at its session on Tuesday – especially regarding the sale of people by IS, as well as other violations and abuses by Boko Haram, al-Shabaab, the Lord’s Resistance Army and other such groups for the purpose of sexual slavery, sexual exploitation and forced labor.

Unanimously adopting resolution 2388 (2017) ahead of a day-long debate on that subject, the Council underscored the importance of collecting and preserving evidence relating to such acts so as to ensure that those responsible could be held accountable.  It reaffirmed its condemnation, in the strongest terms, of all instances of trafficking in persons, especially women and children, who made up the vast majority of all trafficking victims in areas affected by armed conflict.

The Council stressed that trafficking undermined the rule of law and contributed to other forms of transnational organized crime that could exacerbate conflict and foster insecurity and instability, thereby undermining development. The importance of cooperation in enforcing international law in investigating and prosecuting trafficking cases was also one of the pressing topics at hand.

The discussion on intention to give greater consideration to how peacekeeping and political missions could help host countries combating human trafficking was given vital importance. The Council also requested that the UN secretary general ensure the inclusion of trafficking in assessments of country situations and in the training of mission personnel, which would help in identifying, confirming, responding and reporting on situations of trafficking.

UN Secretary-General António Guterres briefed delegates at the meeting and declared “it is our collective responsibility to stop these crimes” by bringing perpetrators to justice, increasing humanitarian aid and strengthening national capacity to protect the vulnerable.

Reports from UNODC showed that increasing numbers of victims trafficked from Iraq, Syria and Somalia were appearing in Asia, Europe and the Middle East, he noted.