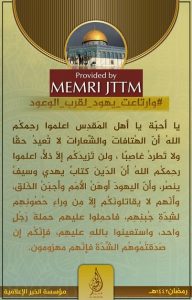 In response to recent tensions between Palestinians and Israelis in Jerusalem, pro-Islamic State (ISIS) media groups released posters urging Palestinian Muslims to wage jihad against Israel and slamming “apostate factions of Palestine” – a reference to Hamas and other Gaza-based jihadi groups – for using “empty and hollow slogans.” The posters follow calls to Palestinians by pro-ISIS media outlets and ISIS supporters to wage “uncompromising” jihad against Israelis and Jews, like reported by memri.org.

The pro-ISIS Al-Khayr Foundation released two posters titled: “And The Jews Were Frightened at the Approach Of Promises” – a phrase originally used by Al-Qaeda leader Osama Bin Laden to rally Muslims against Israel.

In the first poster, the media group warned Palestinians that “chants and slogans do not restore rights or expel a usurper [from your lands].” It also advised them to unite and wage jihad against Israelis, reminding them that “the religion is a book that guides and a sword that brings victory” and that “the Jews are the weakest nation and the most cowardly creations.”

The second poster urged Muslim Palestinians to wage jihad against Israelis, whom it described as the “grandsons of monkeys and pigs.” The poster also urged them to “kill them with any means available,” such as knives and vehicles.

Addressing Muslim youths, the poster urged them to use knives and run over Israelis with their vehicles.

Meanwhile, the pro-ISIS Al-Battar Foundation released a poster titled “Palestine And the Trafficking of the Deviant Ones” depicting Palestinian leader Mahmoud Abbas and Hamas leader Ismail Haniyeh in flames above the Jerusalem skyline. The Arabic text on the poster accused the leaders of both Fatah and Hamas, and what it called “militias which receive their orders from Tehran and the UN,” of having “sold Palestine” for nothing other than securing “their own safety and lavish funds.”

Warning Palestinians that “apostates are selling them day and night,” the poster urged them to rise up and wage jihad: “The solution is at your hands: waging jihad. It is the word that frightened the Christians and Jews everywhere.”