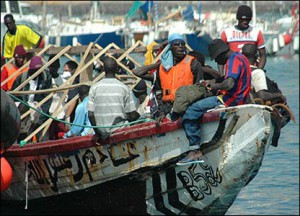 ISIS may use immigrant boats to get terrorists into Italy and in Europe, and buy weapons on the black market, said the Libyan ambassador to the Holy See, Mustafa Rugibani.

In an exclusive interview with AGI, the ambassador appealed to Italy to help rebuild the Libyan army with equipment and military training. Europe’s support for the government and the Libyan army was vital to defeat the jihadists of the Islamic State and end the smuggling of immigrants, he continued.

“Two years ago Isis was much reduced but now they are expanding in Derna, Benghazi, Sirte, Tripoli, and Sabrata: they are active in all these cities. They are advancing in Tripoli. Just consider the attacks on the Corinthia Hotel (in January) and the embassies of Morocco (on Apr. 13) and Spain (on Apr. 20). The only way to fight them is to stabilise the government and army,” he said.

The danger from terrorists also came from Mali, Iraq, Syria, Egypt, and Algeria. “Our coastlines are open. Our land border is more than 7,000 kilometres and 2,000 kilometres [overlooked the sea],” he said. “We need the help of Europe and we expect Italy to have a role and provide equipment and training for our soldiers.”

The ambassador, a former minister in the transitional government of Abdurrahim El Keib, went on: “Italian soldiers cannot come to Libya. This is 100 percent certain. You can send advisers for training, you can monitor the coasts to stop the arrival of the weapons, you can do many things, but not send soldiers because it would be an invasion and this goes for Italy, as for Egypt, and for any other country.”

He ruled out foreign military intervention and said it was impossible to bombard the boats to stop the illegal immigration: “No one can resolve this problem militarily. When Libya is stable, you can make an agreement with our government to stop the smugglers.” On Egypt “only one bombing” was the retaliation after the beheading of 21 Coptic Christians in Libya, in a reaction to public pressure.

Ambassador Rugibani also discussed the situation on the ground, negotiations conducted by Bernardino Leon and a proposal from the UN Special Representative. .