You are here: Home / MidEastGulf / Islamic State mastermind of suicide attacks in Iraq, says he has no regrets killing 100 people 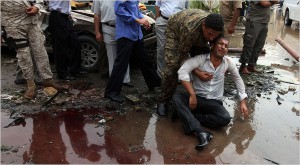 “The mastermind of the suicide attacks in Iraq” carried out by ISIS terrorist organization called “Obu Abdullah” said that he has no regret after killing nearly 100 people.

The Guardian newspaper said that the so-called ” Obu Abdullah ” “was at the top of wanted list in Iraq,” and that he was nicknamed by his employers in Islamic State organization as the mastermind , he was the man responsible for the transfer of the suicide bombers to carry out their operations in mosques , universities, checkpoints and markets in all parts of the Iraqi capital. ” .

The newspaper added that “Abu Abdullah today is in the most Iraqi protected prisons since his arrest last July.”

Abu Abdullah said in an interview with the newspaper , lasted for 90 minutes, that ” his planned suicide bombings claimed the lives of at least 100 Iraqis, the majority of the Iraqi security forces and in some cases some of ordinary citizens, including women and children.”

He said Abu Abdullah, “I was praying with suicide hours before their transfer to carry out suicide operations.”

About how they were chosen to implement these suicide attacks, he said that they were coming to him, he look to them directly in their eyes to see if they are ready or not, then sit with them , read Quran and pray with them.

He stressed, “I had no regrets for what I did, I am convinced on my actions, I do not want to talk about my family, too”.