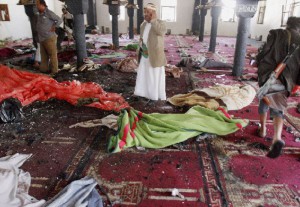 For a long time, the Kingdom of Saudi Arabia had been a source of stability in the troubled Middle East as well as a reliable pivot to U.S. regional policy. Ruled by the potentates from the house of al-Saud since its founding, the kingdom is the center of Sunni Islam and a rival to Shiite Iran, which contests its dominance in the Arab world. It has been mostly at peace despite severe criticism by human rights groups for its handling of dissidents and women. Liberals and democratic forces “loathe” it for other obvious reasons.

It seems that the anarchic winds which have disturbed the region might have reached the “holy land.” Their ominous arrival was announced with a deadly bang, shattering the peace in Saudi Arabia. A suicide bomber hit a Shiite mosque during weekly Friday prayer, killing at least 19 worshippers. There were no words to condemn the despicable act.

The Islamic State (IS) branch of Saudi Arabia claimed responsibility. The entry of the militant groups into Saudi Arabia coincided with its rebels overrunning Ramadi, capital of Iraq’s largest province of Anbar, and the ancient city of Palmyra in Syria.

The Saudi mosque attack is tragic as well as ironic. It has been perpetrated by the ultra-radical Islamists which some people in the kingdom allegedly had been promoting in other Muslim countries. The issue of funding by rich Saudis for the extremist groups has been in the limelight for years. For reasons best known to the ruling royal family, no reliable bars have been imposed on such funding. Apart from the private donations, Riyadh was also in the lead to generate funds for the radical Muslim groups fighting against the USSR in Afghanistan in the 1980s. Groups like al-Qaeda and the IS have been inspired by the jihadi culture nurtured in the mountains of Afghanistan.