You are here: Home / Mediterranean / Islamic State loses control of major urban base of Derna in Libya 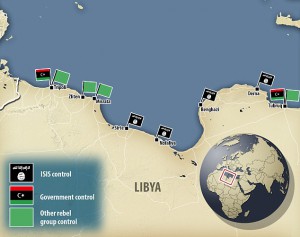 There has been fighting between the two groups ever since with the Council declaring a holy war against IS. Derna has a long history of hosting radical Islamists even before Gadaffi was overthrown. The residents eagerly joined the battle to oust Gadaffi. Derna was the first city to come under control of the Islamic State but many local residents did not agree with their ideology, nor their tactics, and the group fought with other long established jihadist groups in Derna.

While the Islamic State does contain many locals who converted from other radical groups, some of the members and leaders are foreigners who have come from afar after having participated in battles in Syria and Iraq or Yemen. The Al-Qaeda linked Ansar Al Sharia group that is blamed for the attack on the US consul in Benghazi has lost many members to IS and is one of the groups in Derna fighting against IS. The same group was subject to a recent US attack targeting a well-known militant, although doubts remain as to whether Mokhtar Belmokhtar was killed.

The Shura group had made gains recently taking some key facilities in Derna and driving IS out of many areas but now it appears they have been completely driven out into a nearby mountain area. However, the Libya Herald is already reporting that IS is mounting a counter-attack and advancing towards the city.

The Tripoli government applauded the Shura Council and promised medical supplies and other aid to help defeat the Islamic State. The Tripoli government has been losing ground to IS in the city of Sirte and surrounding area with IS recently taking control of the airport and of the last suburb of Sirte controlled by Tripoli. It contains an important power plant.

The UN presented a fourth draft plan for a unity government it hoped would be agreeable to the two rival governments. The Tripoli, GNC, or Salvation Government has reacted positively to the draft but wants to present some amendments before officially ratifying it. The Tobruk government has rejected the draft and the members of the HoR have varying opinions about what should be done. The UN special envoy, Bernardino Leon hoped to have an agreement before the start of Ramadan on Thursday. That seems unlikely if not impossible at this late date.