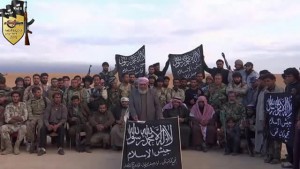 Rebels and Al-Qaeda’s Syria affiliate clashed Tuesday with jihadists linked to the Islamic State group along Syria’s border with Israeli on the Golan Heights, a monitor and an opposition spokesman said.

Rami Abdel Rahman, head of the Syrian Observatory for Human Rights, told AFP that rebel groups, as well as Al-Qaeda affiliate Al-Nusra Front, fought IS-linked Jaish al-Jihad in the border town of Qahtaniya in the southern province of Quneitra.

“These are key battles, because IS now has a presence in Syria’s south and because they are close to the ceasefire line with the Golan,” said Abdel Rahman.

Qahtaniya lies inside the demilitarized zone between Israel and Syria and is only some 300 meters from the border with Israel.

“This is the first time these groups have clashed with each other,” he added.

Jaish al-Islam is a relatively new group but is suspected to have very close ties to IS, according to Romain Caillet, a French expert on jihadists.

Essam al-Rayes, spokesperson for the Southern Front coalition which is fighting Jaish al-Islam, said the IS-linked group had a presence in and around the town of Qahtaniya.

Speaking by phone from Jordan, Rayes said tensions among opposition fighters in the town rose after it was suspected that Jaish al-Jihad had pledged allegiance to IS.

“Al-Nusra Front then joined the fight, because Daesh is our common enemy,” Rayes said, using the Arabic acronym for IS.

The Southern Front had been planning a large offensive on regime-controlled areas north of Qahtaniya, but the latest clashes delayed their assault, Rayes told AFP.

Last month, rebel groups in southern Syria, including the Southern Front, said they would not cooperate with Al-Nusra in future battles.

Syria’s conflict began in 2011 with peaceful protests, but has since become a complex civil war which has killed more than 220,000 people.