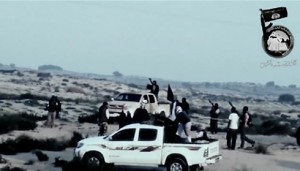 The Ansar Bayt al-Maqdis Islamist group issued a statement hailing its attacks on “occupied Palestine” and gloating that it had “turned night into day” for residents in the Sderot area.

Nonetheless, Israel has said it holds Gaza’s Hamas rulers responsible for any attacks out of the Hamas-run Strip.

The Israel Defense Forces warned early Saturday that it would continue to act strongly against any attempts to attack Israeli communities bordering the Gaza Strip, hours after IAF fighter jets hit four targets belonging to the Hamas terror group in response to rocket fire Friday night.

“The Hamas terrorist organization is solely responsible for all terrorist activity emanating from the Gaza Strip,” the army said in a statement. “The IDF will continue to act strongly against any attempt to disrupt the quiet in the southern communities.”

Five rockets were fired Friday night at Israel from Gaza, which has been under Hamas rule since 2007. Two of the rockets fell in open areas in the area of the southern city of Sderot, and three exploded before they crossed the border.

There were no reports of injuries or damage.

Air raid sirens sounded in communities bordering the Hamas-ruled Strip shortly after 11 p.m., followed by reports of sounds of explosions near Sderot.

According to Channel 2, air raid sirens did not sound in Sderot. Security forces searched the area for the landing sites, the report added.

Local residents were instructed to enter their protected areas after the attack, the Ynet news website reported.