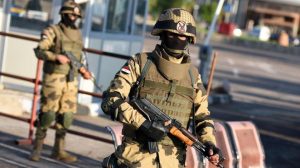 A high-profile Islamic State commander in Sinai has given himself up to a tribal union loyal to the Egyptian military, exposing possible cracks within the organization and potentially putting valuable information at the disposal of Cairo, like reported by al-monitor.com.

Mohamed Saad Kamel, also known as Abu Hamza al-Qadi, turned himself in to the Association of Sinai Tribes on Sept. 10 after contacting association leaders. He got pledges from the association for his safety and that of his wife and three children.

Qadi is the highest-ranking IS Sinai commander to turn himself in to the authorities to date, suggesting the noose is tightening around the terrorist organization in the Egyptian territory, which shares borders with Israel and the Gaza Strip.

“There is close coordination between the army and Sinai tribes,” Sinai tribal leader Sami Kamel told Al-Monitor. “This advances the crackdown on the terrorist organization noticeably.”

The military has been running a massive operation in northern and central Sinai since February 2018. Codenamed Sinai 2018, the operation involves all divisions of the military, including the air force and the navy. Ground troops comb every inch of northern and central Sinai for IS militants, tracking down dozens of militants and arresting or killing them.

The tightening grip of the military and Sinai tribes loyal to it appears to be stopping IS militants from attacking military checkpoints and camps and forcing the terrorist organization to resort to untraditional tactics, including the planting of roadside bombs.

On Aug. 13, nine police officers were killed and six others wounded when a roadside bomb strick their armored vehicle in New Rafah, near the border with the Gaza Strip. The attack came only 13 days after IS militants attacked a security checkpoint in the northern Sinai town of Sheikh Zuweid, killing five troops and injuring six others.

These attacks and others show that IS is still alive, even as military troops and civilian police fight tooth and nail to defang the terrorist group.

The changing strategy of IS, including through increasing dependence on the planting of bombs, shows that the group is much weaker than it was a few years ago. “There are some sleeper cells that are always ready to launch attacks,” security analyst Nasr Salem told Al-Monitor. “Nevertheless, IS’ attacks bespeak marked deterioration in its capabilities and its gradual collapse.”

Security analysts like Salem attribute the weakening of the organization to the success of the Egyptian counterterrorism strategy in Sinai as well as convincing Sinai tribes to join the anti campaign.

When terrorism emerged as a threat to Egyptian security in Sinai in 2013, the Sinai tribes remained on the sidelines, partially out of fear and partially because some of the terrorists were tribesmen venting their anger against the Egyptian government for failing to develop Sinai and help its residents. However, the tribes started turning against the terrorists after they intimidated and killed tribe members.

“Attacks by IS militants against the tribes — among other things — caused the tribes to start viewing them as an enemy,” analyst Muneer Adeeb told Al-Monitor. “The coming together of the military and the tribes will surely speed up the eradication of IS.”

The Association of Sinai Tribes brings together many of the tribes of northern and central Sinai. Its members have gone beyond providing the military with intelligence, including information about the hideouts of the terrorists and potential attacks, to participating in counterterrorism operations and fighting IS militants themselves.

On Sept. 14, the association shared a video showing its anti-IS operations in parts of Sinai. The video purportedly shows members of the association killing IS militants.

Qadi was IS’ top jurist and sanctioned most of the major attacks by the terrorist organization, including an attack on a Sufi mosque in the northern Sinai village of al-Rawda in November 2017. The attack left over 200 people dead, over 75% of the village’s male population.

Qadi also authorized the killing of nine truck drivers who worked for a cement factory in northern Sinai in November 2017. His surrender points to cracks within IS and may have a domino effect among IS militants, security analysts say. They add that his surrender will give the military access to important information about the hideouts of the members of the terrorist organization as well as its supply routes.

IS used to get its supply of arms and militants via Egypt’s shared border with Libya. The terrorist organization also gets supplies and recruits from Gaza, where jihadist groups give it backing.

“Terrorist organizations are always keen to shroud their financing sources and supplies in complete secrecy,” Adeeb said. “This financing is the lifeline of any organization and its discovery spells the outright death of this organization.”