You are here: Home / MidEastGulf / Islamic State leader delegates his powers in case he is killed 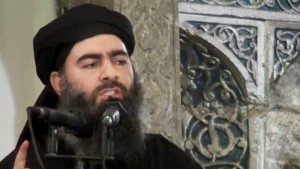 The Islamic State’s reclusive leader has empowered his inner circle of deputies as well as regional commanders in Syria and Iraq with wide-ranging authority, a plan to ensure that if he or other top figures are killed, the organization will quickly adapt and continue fighting, U.S. and Iraqi intelligence officials say.

The officials say the leader, Abu Bakr al-Baghdadi, delegates authority to his Cabinet, or shura council, which includes ministers of war, finance, religious affairs and others.

The Islamic State’s leadership under al-Baghdadi has drawn mainly from two pools: veterans of al-Qaida in Iraq who survived the insurgency against U.S. forces with battle-tested militant skills, and former Baathist officers under Saddam Hussein with expertise in organization, intelligence and internal security. It is the merger of these two skill sets that has made the organization such a potent force, the officials say.

But equally important to the group’s flexibility has been the power given to Islamic State military commanders, who receive general operating guidelines but have significant autonomy to run their own operations in Iraq and Syria, according to U.S. and Kurdish officials. This means that fighters have limited information about the inner workings of the Islamic State to give up if captured, and that local commanders can be killed and replaced without disrupting the wider organization. Within this hierarchy, Iraqis still hold the top positions, while Tunisians and Saudis hold many religious posts.

Much of a new understanding about the leadership of the Islamic State, also known as ISIS, has come from information about the organization’s financial operations, recruiting methods and security measures found in materials seized during a U.S. commando raid in May in eastern Syria. U.S. officials said gathering more insight on the Islamic State’s shadowy leadership structure was a top priority.

In delegating authority, al-Baghdadi has drawn lessons from the fates of other militant groups, including that of a branch in Yemen called al-Qaida in the Arabian Peninsula, whose leaders have been whittled away by repeated U.S. drone strikes over the years, said a Western diplomat who monitors the group.

“ISIS has learned from that and has formed a structure that can survive the losses of leaders by giving mid-level commanders a degree of autonomy,” the diplomat said. In that structure, the overall operation would not be immediately affected if al-Baghdadi were wounded or killed, he said.

The Islamic State has also studied revelations from Edward J. Snowden, the former National Security Agency contractor, about how the United States gathers information on militants. A main result is that group’s top leaders now use couriers or encrypted channels that Western analysts cannot crack to communicate, intelligence and military officials said.

The two top leaders after al-Baghdadi appear to be Abu Alaa al-Afri, a former top deputy to Abu Musab al-Zarqawi, the former militant leader in Iraq; and Fadel al-Hayali, known as Abu Muslim al-Turkmani, a former Iraqi Special Forces officer from the town of Tal Afar, near Mosul, although there have been unconfirmed Iraqi reports that both men were killed in airstrikes in recent months. It is unclear who would replace al-Baghdadi as the self-declared caliph if he died, a Kurdish official said. But the official said it could not be al-Afri, assuming he is alive, because he is an ethnic Turkmen, and the caliph must be an Arab from the Quraysh tribe of the Prophet Muhammad, as al-Baghdadi claims to be.

The United States is actively hunting al-Baghdadi – rumors that he was killed or injured this year have been dispelled. Defense Secretary Ash Carter told reporters this month that if the opportunity for an strike against al-Baghdadi presented itself, “we would certainly take it.”

Despite the trove of information uncovered in May, U.S. intelligence and counter-terrorism officials say there are still large gaps in what they know about how the Islamic State’s leadership operates and how it interacts with a growing number of affiliates and other followers from Nigeria to Afghanistan. “It is going to just take some time to connect everything together,” said a senior Defense Department official who, like nearly a dozen other officials interviewed here and in Iraq, agreed to discuss confidential intelligence reports only on the condition of anonymity.

The Islamic State’s strict secrecy, which has allowed its leadership to remain so mysterious, has led to some differences among U.S. and other Western analysts on the degree to which al-Baghdadi is in charge and whether the main power in the organization rests with his allies, including several of the former Baathist officers.

A senior Kurdish security official in northern Iraq and several U.S. officials said al-Baghdadi was very much the top leader and that he was involved in issuing orders across the group’s territories. “While many other group leaders also oversee and manage operations, Baghdadi asserts his role through providing guidance and holding meetings with leadership,” said a senior U.S. military official with access to classified briefings on the Islamic State.

But other analysts said al-Baghdadi’s religious credibility was more significant than any operational prowess.

“Baghdadi is to a certain extent a religious figurehead designed to grant an aura of religious legitimacy and respectability to the group’s operations, while the real power brokers are a core of former military and intelligence officials,” said Matthew Henman, managing editor of IHS Jane’s Terrorism and Insurgency Center.

A senior military official with the U.S.-led coalition against the Islamic State also said the group’s tight security made it hard to know who exactly is killed in airstrikes.

When asked if the Islamic State was run from the top down or if local commanders did their own thing, he said, “I’m not sure if we have clarity on that either way.”