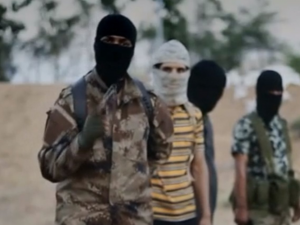 The Islamic State’s high command has sent a senior Iraqi enforcer to head its new outpost in Colonel Gaddafi’s home city of Sirte, Libyan intelligence officials have told The Telegraph.

The enforcer, a bespectacled man known only by the nom de guerre of Abu Omar, has been tasked with tightening the terror group’s grip on Sirte and preparing it as a possible bolt hole for Isil’s leaders in Syria and Iraq, the officials said.

As the Telegraph has reported, Isil is now believed to have up to 3,000 fighters in the city, who have received a warm welcome from embittered ex-Gaddafi loyalists.

Details of their new alleged commander-in-chief were revealed by Colonel Ismail Shukri, the head of military intelligence in Misrata, the closest major city to Sirte, where the security forces are now hoping for British military help to clear Isil out.

In an interview at his high-security intelligence headquarters, Colonel Shukri said that Abu Omar had arrived in Sirte in October and was backed by a deputy from Tikrit, the birthplace of the late Iraqi dictator Saddam Hussein.

“There is solid intelligence on Abu Omar,” Col Shukri said. “He is always surrounded by bodyguards – mainly Tunisians – and he has a personal assistant who is Mauritanian. He and has helped set up an Islamic Court and tax system in Sirte.

“His arrival has caused some friction with some of the local Isil commanders, and we think he has been sent here by Abu Bakr al-Baghdadi (Isil’s overall leader in Syria and Iraq).

The unity government, headed by businessman Fayez al-Sarraj as prime minister, has 32 ministers but is still opposed by hardliners in either faction.

Isil has exploited the recent security vacuum to gain a firm foothold in Sirte, from where they have also orchestrated a wave of car bombings and terror attacks across the rest of the country. According to Colonel Shukri, around 70 per cent of the Isil followers in Tunis are foreigners – mostly Tunisians – with small numbers also from Syria, the Gulf States,, and Sudan, Niger and Chad.

The Isil presence has been viewed with growing alarm in Misrata, 180 miles east along the coast, where a brutal siege during Libya’s 2011 Arab Spring bred some of Libya’s toughest rebel brigades.

Misratan brigades battled the Isil forces in Sirte last Spring, but pulled out in the summer amid mounting casualties on their own side and fears that a full-scale assault would cause heavy civilian casualties.

Now, though, with Isil becoming an increasingly powerful menace, Misrata’s leaders say there is now no option but to mount a renewed assault, possibly with Western help.

Britain has said that it will offer up to 1,000 troops as part of a 6,000 strong training and stabilisation mission led by Italy, Libya’s former colonial power. The mission would not see the troops involved in frontline combat, but would probably provide intelligence, air power and logistical help in any fight against Isis.

The go-ahead for the mission depends on the Libyan government issuing a formal request. While some Libyan factions are opposed to the idea of any Western military involvement at all – partly on the grounds of national pride – most observers believe the new authority will take a more pragmatic view.

“We do not support foreign boots on the ground at the frontlines,” said Colonel Ismail Shukri, the head of military intelligence in Misrata, the city closest to the Isil frontlines. “But we will support any country that helps us to fight Isil with training and logistical help.”

Col Shukri added that a plan “was now in motion” to cut off Isil’s supply lines into Sirte, ahead of more long-term operations to oust the group completely.

The rising threat from Isil appears to have played a role in convincing Libya’s different factions to belatedly bury their differences. Earlier this month, the group carried out one of its worst-ever terror attacks on Libyan soil, killing more than 60 people in an attack on a police training college in Zliten, 40 miles west of Misrata.

“We Libyans have aired our differences over recent years as we get used to democracy, but now we recognise the need to stick together,” said Mohammed Eltumi, a member of Misrata’s city council. “Otherwise this Isil cancer will spread.”

However, some Libyans remain opposed to the new unity government, claiming that they have been unduly pressured by United Nations negotiators into accepting a cabinet that will no legitimacy. “The UN cannot simply shuffle the pack and tell us which politicians are going to rule,” said Jamal Zubia, the foreign media spokesman for the General National Council, until now the de facto government in Tripoli.

Diplomats have made it clear that any Libyan politician who stands in the way of the new government can now expect to be the subject of international sanctions on the basis that they have deliberately sought to block the peace-building process.