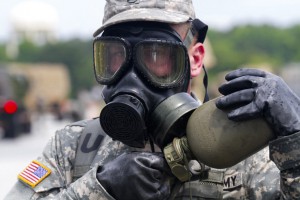 Chairman of the Joint Chiefs of Staff Gen. Joseph Dunford told members of the Senate Armed Services Committee “mustard blister agent” was released in the vicinity of a military airfield in the western part of al Qayyara, about 40 miles south of Mosul, in northern Iraq.

The airbase has been designated by Iraqi and American commanders as the main logistics hub to support a series of firebases that will serve as jumping-off points for 14 Iraqi Army brigades and thousands of peshmerga and militia fightersfor the eventual siege of Mosul.

Local reports state an artillery shell armed with the chemical agent was fired into the airfield’s perimeter. The base has been the target of numerous attacks by fighters tied to the Islamic State, or ISIS, ISIL or Daesh based inside Mosuland surrounding areas still held by the terror group.

It is the first chemical attack utilizing mustard gas aimed at U.S. troops since World War I.

For his part, Gen. Dunford said the presence of the chemical agent at the Qayyara airbase may have been the result of blowback from recent coalition airstrikes against suspected chemical weapons facilities operated by ISIS.

“We’ve had a number of strikes … over the past year against [ISIS’s] emerging chemical capability. And in this latest strike, again, we assess was a sulfur mustard,” the four-star general said Thursday.

While there were no reports of any American servicemembers injured as a result of exposure to the gas, Gen. Dunford said Islamic State did possess a “very rudimentary capability to deliver” chemical agents to the battlefield, adding such a capability “was a concerning development.”

The strike comes as U.S., Iraqi an coalition commanders are reportedly in the final stages of planning for the assault on Iraq’s second largest city. In July, Defense Secretary Ashton Carter announced that an additional 560 American troops would be deployed as government forces prepare to drive onto the city.

The deployment bumps up the total number of American troops in Iraq up to roughly 6,000, according to unofficial estimates of U.S. troop strength in the region.

Earlier this week, Gen. Dunford told reporters that Iraqi forces would be ready to begin the assault as early as October. Both Washington and Baghdad have repeatedly stated that Mosul would be under government control before the end of the year.