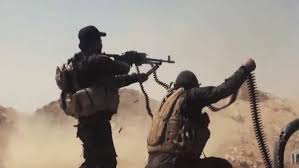 Members of the so-called Islamic State late Monday carried out multiple attacks on members of the Iraqi security forces in territories disputed between Baghdad and Erbil, leading to several casualties, like reported by kurdistan24.net.

The Iraqi army confirmed in a statement that “ISIS launched an attack on a federal police station in the Obour complex area, south of Daquq district, in Kirkuk province,” adding that it killed four officers and wounded four others.

The assault came a few hours after a similar incident that targeted a military post in al-Azim district, 60 km north of Baquba, Diyala province, wounding an Iraqi soldier.

According to the head of the district, Abdul Jabar al-Obaidi, “the terrorists” tried to target agricultural pumps and an electrical transformer near the military outpost, resulting in clashes with the army.

Over the past few months, al-Azim has been the site of a series of Islamic State attacks, with suspected terrorists infiltrating the area from the border areas with Salahuddin province.

Earlier on Monday, members of the terrorist organization attacked a village north of Qara Tapa district, Diyala province, and kidnapped three people and wounded a fourth who tried to resist them.

The head of the Qara Tapa subdistrict, Wasfi al-Tamimi, told local media that Islamic State members, in four vehicles, attacked the village of Safsafa, 12 km north of the district center. They kidnapped three fishermen and wounded a fourth person, who tried to prevent them from kidnapping his son. The gunmen then fled to an unknown location.

Qara Tapa includes 66 villages and is considered one of the disputed areas covered by Article 140 of the Iraqi constitution. It is a diverse area inhabited by Arabs, Kurds, and Turkmen.

The Islamic State has routinely held captives from rural areas for ransom, often killing them even after family members had followed their demands for large amounts of money.

They have also carried out hundreds of bombings in different parts of the country as they continue to wage an insurgency following their territorial collapse in Iraq in December 2017.

Kurdish officials have warned that the security vacuum in disputed areas created by the lack of coordination between Peshmerga and the Iraqi security forces offers terrorists the opportunity to regroup and stage attacks in nearby populated areas.

Though recent steps have been taken to increase coordination between the two governments on security matters, a burgeoning partnership remains to be seen to provide a more stable environment for the citizens of the majority Kurdish but ethnically diverse province.