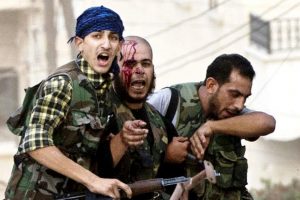 Islamic State has killed at least 40 U.S. backed Syrian fighters and regained areas it had earlier lost in a major flare-up of violence in the last pocket of land controlled by the group, according to a monitoring group.

The Britain-based Syrian Observatory for Human Rights said the group has killed dozens of members of the Syrian Democratic Forces and captured at least 20 of them after launching a counteroffensive in the eastern province of Deir el-Zour.

The terrorist group also is said to have captured Sousa, a village which they lost control of earlier this week.

The ISIS-linked Aamaq news agency released video of six SDF gunmen it said had been captured alive, according to the Associated Press.

Fighting reportedly continued until early Saturday, with IS fighters attacking SDF positions in the area.