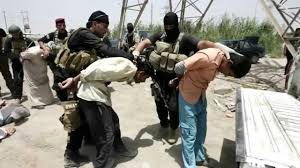 Islamic State forces on Tuesday killed dozens of insurgents from rival factions during an offensive in northern Syria’s Aleppo province.

Quoting a statement by the terrorist organization, Xinhua news agency reports IS forces killed 50 rebels with the al-Shaitaat tribe after infiltrating into the town of Mare’.

The Syrian Observatory for Human Rights, a Britain-based group that monitors the war in Syria and gathers information from a network of sources in the country, reported 20 rival rebels being killed in the attack, as well as eight IS fighters, including two suicide bombers.

SOHR noted it was unclear whether the IS force had infiltrated Mare’ or broke into the town by direct assault, but Xinhua, quoting the IS statement, reported the assault had been undertaken by an IS special forces unit known as “Enghimasiyoun,” which is Arabic for “those who immerse themselves,” that infiltrated before attacking.

IS forces have recently launched an offensive in Aleppo province to try cutting off rival groups from supply points on the Turkish border.

On Sunday IS militants killed up to 40 rival insurgents and lost 19 of their own fighters before taking the town of Om Kosh, south of Mare’.

IS lost a major supply point in June when Kurdish forces, backed by U.S.-led coalition airstrikes, captured the Turkey-Syria border town of Tell Abiad, which cut off a main route leading from Turkey toward the group’s self-declared capital of Raqqa.

IS forces also arrested 20 civilians in three villages near Mare’ on Tuesday, taking them to unknown locations, according to SOHR.

The IS statement claimed the al-Shaitaat tribesmen in Mare’ had relocated to the town after fleeing from Deir Ezzor province in Syria’s east, where the tribe fought IS last summer.

A single mass grave discovered in Deir Ezzor in December 2014 contained the bodies of more than 230 people from the tribe.

SOHR released a report in April tallying more than 2,000 IS executions in Syria since the group declared a caliphate in June 2014. Of those, 930 came from the al-Shaitaat tribe.