You are here: Home / MidEastGulf / Islamic State kills 12 in Palmyra, among them teachers, soldiers 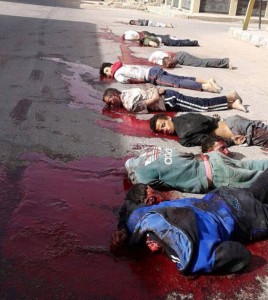 Islamic State militants put at least 12 people to death in execution-style killings in the ancient city of Palmyra, which they re-captured from the government for a second time in December, the Syrian Observatory for Human Rights reported.

The jihadist group beheaded four of the people – state employees and teachers – outside a museum, the group said. The eight others – four of them government soldiers and four of them rebel fighters captured elsewhere in Syria – were shot.

Some of the killings took place at an ancient Roman theatre in Palmyra, where Islamic State last year put at least 25 government fighters to death, the Observatory said.

Islamic State captured Palmyra for a second time from the government in December. Government forces and their militia allies, backed by Russian air power, took the city back from Islamic State in March, after first losing it in 2015.