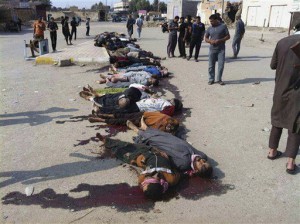 The Islamic State of Iraq and Syria (ISIS) terrorist group militants have killed at least 400 people mostly women and children in the ancient city of Palmyra.

According to the Syrian state television, the mass killing by the ISIS militants was carried out after the city fall to terror group’s control.

An image of an ancient castle in the area was posted with a black flag flying above it was posted online by one of the group’s supporters.

The ancient was reportedly captured by the ISIS militants on Wednesday with the opposition activists saying hundreds of bodies were seen in the streets following the fall of the city, Reuters reported.

The activists also added that those killed by the ISIS militants were believed to be government loyalists.

The ancient Palmyra city is home to renowned Roman-era ruins including well-preserved temples, colonnades and a theatre and is a Unesco world heritage site.