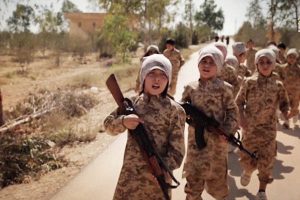 The number of children fighting on behalf of ISIS has skyrocketed in the past years, with hundreds having been found on the battlefield and others being used as executioners for the radical terror group, according to a new report authored by the United Nations, like reported by freebeacon.com.

U.N. officials have verified that hundreds of children kidnapped and recruited by ISIS have been found on the battlefield after being trained in fighting centers set up in war torn Syria and other locales, according to the latest report.

In some cases, children as young as seven years old have been fighting on the battlefield, marking a “significant increase” over previous years, according to the U.N. report, which discloses evidence of video footage showing children executioners killing on ISIS’s behalf.

The report shines a spotlight on the growing exploitation of children by radical terror groups, including ISIS, Boko Haram in Nigeria, and others, as they wage war in hotspots across the globe.

The number of children warriors is likely much higher than reported due to difficulties tracking these radical organizations and keeping proper records about their recruitment efforts.

“In 2015 alone, the United Nations verified 274 cases of children having been recruited by Islamic State in Iraq and the Levant (ISIL) in the Syrian Arab Republic,” according to the report. “The United Nations verified the existence of centres in rural Aleppo, Dayr al-Zawr and rural Raqqah that provided military training to at least 124 boys between 10 and 15 years of age.”

“Verification of the use of children as foreign fighters has increased significantly, with 18 cases involving children as young as 7 years of age,” the U.N. found. “The use of children as child executioners was reported and appeared in video footage. In Iraq, in two incidents in June and September 2015, more than 1,000 children were reportedly abducted by ISIL from Mosul district.”

Though accurate data is difficult to gather, the U.N. kept its estimates conservative, meaning that the actual number of children being kidnapped, exploited, and used on the battlefield is likely much greater.

“While the lack of access to areas in conflict undercuts the possibility to gather precise data, it is known that recruited children were used to act as spies and scouts, to transport military supplies and equipment, to conduct patrols, to man checkpoints, to videotape attacks for propaganda purposes and to plant explosive devices, as well as to actively engage in attacks or combat situations,” according to the report.

The figures provided by the U.N. “are likely to be significant underestimates because of the limited opportunities to gain access and monitor violations against children.”

In Nigeria, where the notorious ISIS-affiliated Boko Haram continues to seize territory, estimates indicate that more than 8,000 children have been recruited since 2009.

These groups also have borrowed strategies from more entrenched terror organizations such as Hamas, which is known to use children as human shields in battle.

“Some boys and girls were increasingly being used as human shields and to detonate bombs,” the U.N. found. “In May 2015, for example, a girl about 12 years old was used to detonate a bomb at a bus station in Damaturu, Yobe State, killing seven people. Similar incidents were reported in Cameroon and the Niger.”

Not all children fighting on behalf of these organizations were kidnapped and forced onto the battlefield. At least a portion were found to have migrated from their home countries, including some in Europe, to join these radical groups.

The number of those children joining of their own accord is on the upswing, according to the U.N.

“More and more children are travelling from their State of residence to areas controlled by terrorist and violent extremist groups, in order to join them,” the report found.

From 2015 to 2016, at least 89 children who later died in battle joined ISIS from other countries. Their country of origin was only discovered after their deaths, when ISIS eulogized the fighters as martyrs.

These children fighters came from locales as diverse as Iraq, Syria, Australia, France, Lebanon, Libya, and several other countries.