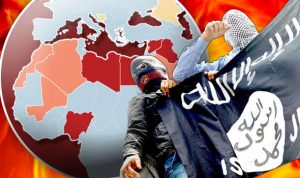 David Beasley, executive director of the UN’s World Food Program, warned that Europe could face a new migrant crisis as jihadists move from the Middle East to Africa.

He said, like reported by ansamed.info, many militants who fled Syria after the fall of its Caliphate there are moving into the Sahel region (which includes Burkina Faso, Chad, Niger, Mali and Mauritania), where they are collaborating with other extremist groups including al-Qaeda, al-Shabab and Boko Haram.

Beasley warned European leaders that they could be facing a migratory crisis much larger than the one caused by the Syrian conflict, if they don’t contribute to bringing food and stability to the region.

“You’re talking about the greater Sahel region of 500 million people, so the Syria crisis could be like a drop in the bucket compared to what’s coming your way,” Beasley said he told them.

He said extremists are “coming into an already fragile area and they’re infiltrating, using food as a weapon of recruitment to destabilize, so that they can have mass migration into Europe”.