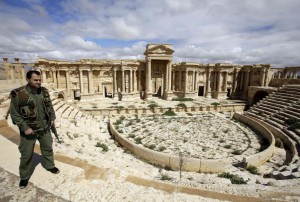 After a lightning advance across the desert in which they overran government forces in ferocious fighting that cost the lives of 110 combatants, the jihadists were within two kilometres (a little more than a mile) of the ruins, the Syrian Observatory for Human Rights said.

“IS has taken all the army posts between Al-Sukhnah and Palmyra” in its drive towards the oasis town from its stronghold in the Euphrates valley to the east, he added.

UNESCO describes Palmyra as a heritage site of “outstanding universal value”. It contains the monumental ruins of a great city that was one of the most important cultural centres of the ancient world.

The threat to its well-preserved 1st and 2nd century temples and colonnaded streets comes as an international conference is under way in Cairo to address the destruction already wreaked by IS on the ancient sites of Nimrud and Hatra in Iraq.

Syria’s director of antiquities, Maamoun Abdulkarim, said he had no doubt that if Palmyra fell to the jihadists, it would suffer a similar fate to ancient Nimrud, which they blew up earlier this year.

“If IS enters Palmyra, it will spell its destruction,” Abdulkarim told AFP. “If the ancient city falls, it will be an international catastrophe.

“It will be a repetition of the barbarism and savagery which we saw in Nimrud, Hatra and Mosul.”

Provincial governor Talal Barazi said that the adjacent modern town of Tadmur was sheltering 1,800 families who had fled Al-Sukhnah as it fell to IS on Wednesday.

Both sides suffered heavy losses in the battle for the town, including senior commanders.

Jihadist websites named him as Abu Malik Anas al-Nashwan, who appeared in an IS video showing the beheadings of 28 Ethiopian and Eritrean Christians in Libya last month.