You are here: Home / MidEastGulf / Islamic State jihadis move their families from al-Bab to Raqqa 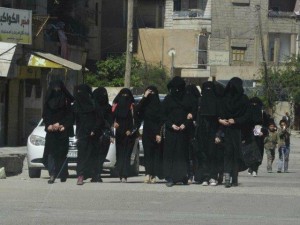 Jihadis of the Islamic State (ISIS) started moving their families from the city of al-Bab in Syria’s northern Aleppo province to Raqqa, in a bid to avoid confrontations with Turkey-backed rebel groups and the Kurdish-led Syrian Democratic Forces (SDF).

Dozens of families of ISIS militants were moved to secure locations in Raqqa province–the ISIS de facto capital in Syria.

“The Islamic State members started moving their families on Saturday. Since then, dozens of vehicles were seen existing al-Bab, carrying women and children believed to be family members of the ISIS jihadis,” local media activist Nassim Babi told ARA News.

“They have secured a route towards Raqqa, where their families could be safer after the group lost much of its power in northeastern Aleppo,” the source reported.

This comes as the Kurdish-led SDF forces continued their advance towards the al-Bab city in northern Aleppo. Also, the Turkey-backed rebels of the Euphrates Shield Brigades announced readiness to fight ISIS in al-Bab and other areas in northern Syria.

“ISIS has been under heavy pressure in al-Bab. The decision of evacuating their headquarters comes after the SDF forces made further advance towards the key city after retaking Manbij from the radical group,” SDF officer Habun Osman told ARA News.

In the meantime, activists said that clashes may erupt between the SDF and Turkish-backed rebels if both forces tried to storm the city of al-Bab after ISIS departure. Sporadic clashes took place earlier in August between Turkey-backed armed forces and Kurdish-led SDF troops near Jarablus city in northern Syria.