You are here: Home / Mediterranean / Islamic State is tightening its control over Libya’s central coastal area 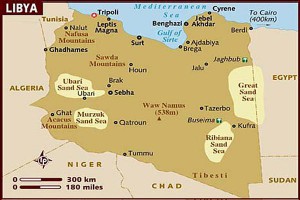 With its seizure of control over Harawa last Thursday, the Islamic State (IS) group in Libya has expanded and strengthened its hold in north-central Libya, controlling the area from Sirte to Bin Jawad near the petroleum crescent region.

‌IS, which declared its presence in Egypt in October 2014, has once again emerged the greatest beneficiary of the political polarisation and civil war that have gripped the country for more than a year.

‌As for the main Libyan factions, they are taking part in the UN-sponsored dialogue process being held in Skhirat, Morocco. On 11 June representatives are due to fly to Germany to meet with the five permanent members of the Security Council.

‌In expanding and strengthening its control over a considerable stretch of Libya’s Mediterranean coast, IS has cast into relief the magnitude of the political and security vacuum caused by the conflict between rival factions. The factions have shown themselves incapable of managing the affairs of the country since the fall of the Gaddafi regime.

‌The development has also demonstrated the ability of the recently arrived extremist organisation to win over large numbers of members from Ansar Al-Sharia in Sirte, as well as its ability to rapidly subdue the inhabitants of smaller towns on the Libyan coast. They have offered material assistance and reached understandings in exchange for pardons for those residents who fought against IS in March, April and May.

‌Such tactics, combined with lack of support from either of the warring factions in the east and west, led these communities to rapidly cave in to IS demands and accept its rule. It has become obvious to the public in most parts of the country that the warring factions are not concerned with and are unwilling to seriously undertake the responsibility for curbing the spread of IS in Libya.

‌It is likely that they do not appreciate the danger of this organisation, even as they approach the international community for support to fight it, efforts toward which have not even begun in a serious manner, which again helps to account for the organisation’s ability to expand its hold over strategic parts of the country.

‌IS declared its presence in Libya in October last year when a small jihadist group in the eastern city of Derna declared its allegiance to the emir of IS, Abu Bakr Al-Baghdadi. Subsequently, this year other groups followed suit in Sirte and to a lesser extent in Ajdabiya.

‌What is curious about the Libyan case is that all parties to the Libyan conflict, whether in the east or the west, or affiliates of the former regime, appear to converge on the notion that this serves their interests.

‌It is a situation that enhances IS’s prospects of influencing events in one way or another, regardless of the arguments of the international community and cautions on the dangers of the spread of IS in Libya.

‌The terrorist group’s presence in the central region serves the aspirations of the pro-federalist camp in Cyrenaica. The occupation divides Cyrenaica from what was formerly known as the province of Tripolitania and gives the pro-federalists concrete cause to press more forcefully for the federalist proposal.

‌Several phenomena sustain this assumption, the most important being that militia forces located near the IS- controlled area to the east essentially consist of the Petroleum Facilities Guards, who are subordinate to the House of Representatives and government in the east and are effectively the military wing of the Cyrenaican federalists.

‌These forces have so far made no attempt to confront the IS forces, despite their proximity to them and the continuous threat they pose to the major oil fields and oil ports.

‌In addition, the social composition of the members of IS in this region indicate that it was able to take advantage, with considerable speed, of the anger and frustration among the youth of the region’s tribes one of the factors that facilitated their recruitment.

‌Proof of the inroads that IS made in local recruitment is to found in statements to the press by the chairman of the Assembly of Wise Men and Shura in Sirte, Abdel-Fattah Marzouq, in April. The IS members in that city are known by name and most of them are citizens of that city, he said.

‌Because of such demographics, confronting the organisation requires close coordination between the tribes of the area. Without this the central region could plunge into civil warfare such as that now raging in the west and south.

‌According to sources from Harawa, the latest stronghold to be taken by IS, the local leaders of the town, most of the inhabitants of which belong to the Awlad Suleiman tribes, entered into negotiations with IS to prevent a massive displacement of persons from the town.

‌The negotiations concluded with an agreement that allowed IS members to enter the town unchallenged. On 14 March, IS had threatened to unleash a wave of suicide attacks against the town following the death of 23 of its operatives, including field commander Misbah Al-Jafel, Aka Abu Turab or Abu Zakariya Al-Tunisi.

‌On Friday, the preacher at one of the Harawa mosques, an IS member, instructed the people to repent, this being the step that follows the pledge of allegiance to the organisation. A similar process was carried out in the neighbouring village of Al-Noufaliay in February. There, too, IS required inhabitants “to repent from the heresy and apostasy” of which they had been guilty, according to the extremist group’s dogma.

‌Immediately upon their entrance into Harawa, IS handed over three youths whom it had held in captivity to village leaders. Among them were two brothers the organisation had recently abducted from one of the village’s more prominent families. This was supposed to be interpreted as a gesture from IS of goodwill to the townsfolk.

‌According to available information from the latest town to fall into Islamic State hands, the operatives who have set up base in Harawa are from nearby towns and villages, rather than from abroad. In fact, most of them are already familiar to local inhabitants.

‌Apparently, this too is meant to convey a message of assurance to the people: since the people from neighbouring towns and villages welcomed the organisation, the people of Harawa should feel confident in doing the same. The organisation was undoubtedly assured that they would, as it knows that the rival governments are too preoccupied with the business of strengthening their positions in the negotiating process to worry about ordinary people.

‌Libyan and other sources from Harawa reported, on 31 May, that IS demanded blood money for each of the 23 IS operatives killed during the fighting in on 14 March. The price named was 175,000 Libyan dinars ($127,750) for each. The organisation also ordered the youths who fought against IS in March to repent, warning that it had a list containing all the names of those who took part in the fighting and that it would kill them if they did not repent.

‌IS’s seizure of Harawa has driven many young men from that town to flee southwards toward Sebha for fear that IS would act on its threat of revenge. ‌Meanwhile, there were reports that leaders of the Awlad Suleiman tribe, to which most of the Harawa inhabitants belong, vowed to provide support, especially after IS members carried out three suicide bombings to break through the defences that local inhabitants had created to protect their town.

‌With Harawa, IS now controls a 140-km-long stretch of the central Libyan coastal area. Its expansion has been aided by the fear, lacking weapons and equipment, of massive displacement that drove village leaders to negotiate with and submit to IS.

‌Local sources and observers predict that other towns and villages on the coastal road between Noufaliya and Sirte will follow Harawa. Umm Al-Qandil, Umm Al-Khanfis and Bousaada are among the villages that are likely to capitulate to the IS due to their lack of faith in the ability of either of the rival authorities to come to their aid.

‌Meanwhile, rival Libyan factions continue to appeal to the international community to help them fight IS, even as they continue to fight each other. This has been perceived as a ploy to enhance their negotiating hands in the UN-sponsored dialogue process that seeks to put an end to the political crisis in Libya.

‌During the last round of talks in Skhirat, the UN envoy presented a fourth draft agreement for a solution that is expected to trigger renewed controversy, as it does not provide any guarantees for what will happen on the day after the agreement is signed.

‌Perhaps it was in anticipation of such a controversy that Germany invited the representatives of the major Libyan factions that were taking part in the Skhirat talks to come to Berlin on 11 July to meet with the permanent members of the Security Council.

‌It is expected that the representatives will hear some frank and stern warnings in the event that the factions refuse to demonstrate flexibility and make the necessary compromises to resolve the crisis.