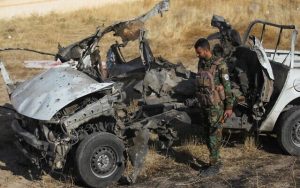 The Islamic State terror group has increased its attacks on Iraqi and Kurdish security forces, killing nearly two dozen people in the last month, according to Iraqi officials, and like reported by voanews.com.

Local government sources and public statements show that a wave of IS bombings and hit-and-run attacks, affecting largely the territories disputed between the Iraqi government and the Kurdistan Region, have killed at least 21 people and wounded dozens more.

Jabar Yawar, spokesperson for the Kurdistan Regional Government’s (KRG) Peshmerga forces, warned of a new and deadlier IS strategy.

“Daesh has changed its tactics,” Yawar told VOA, using the Arabic acronym for IS.

He said the group has shifted away “from large-scale attacks to smaller and targeted ones that have left casualties among the Peshmerga and the Iraqi army.”

The rise in deadly attacks by the radical Sunni group is concerning for Iraqi and Kurdish security officials amid persistent domestic pressure to dismiss the U.S.-led foreign troops in the country.

They say IS has remained active, despite regular airstrikes from the U.S.-led coalition, because foiling smaller-scale insurgency attacks is challenging.

The most recent violence came Wednesday when militants attacked two oil fields in Kirkuk Province. A statement from Iraq’s Ministry of Oil said the attack had not affected oil production but led to “the martyrdom and wounding of a number of security forces and energy police.”

It was not the first time IS attacked Iraq’s oil wells, which are the primary source of the country’s economy. In April, jihadists launched another attack, which did not leave any casualties.

Wednesday’s attack targeted oil wells No. 177 and 183 in Kirkuk.

“These desperate attempts will not discourage or stop oil workers from doing their utmost to protect oil wealth and work to sustain and increase production in the public interest,” the Oil Ministry statement said.

Fear of IS resurgence

Another IS-claimed attack last Saturday left three Kurdish security officers dead in Kirkuk, which is part of the so-called disputed territories between the autonomous KRG in the north and Iraq’s federal government in Baghdad.

In a statement Sunday, Nechirvan Barzani, president of the Kurdistan Region, warned of “a resurgent (IS) and of the continued threats by the terror group to take advantage of a security vacuum in the disputed territories.”

Barzani called on the federal government to coordinate counterterrorism efforts with his government in the contested areas, which security experts say have turned into a no man’s land.

In an interview with state-owned Iraqiya TV, Major General Tahsin al-Khafaji, spokesman of Iraq’s Joint Operations Command, recognized the need for a more effective approach to battle IS.

“[We] have begun to review many intelligence and security plans,” he said, adding that his forces were working to implement “a new style and tactic consistent with the scale of the challenges that are taking place.”

The meeting resulted in a directive from Kadhimi to increase intelligence-sharing with the KRG, according to Yawar and a statement from the prime minister’s office.

The recent attacks coincide with a visit from a senior Biden administration delegation led by Brett McGurk, White House coordinator for the Middle East and North Africa, to Baghdad and Erbil.

On Tuesday, a statement from Kadhimi’s office said “the withdrawal of (U.S.) combat forces from Iraq” was one of the key issues discussed with the U.S. delegation.