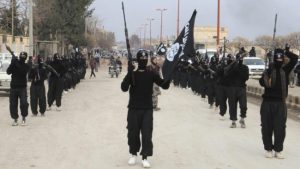 Islamic State has inaugurated a Kurdish emir for the first time at the region between Diyala and Salahuddin provinces, a senior security source said according to iraqinews.com.

Speaking to AlSumaria News, on condition of anonymity, the source said, “IS inaugurated for the first time one ots Kurdish leaders as an emir at Mutaibija region, on the borders between Diyala and Salahuddin.”

The Kurdish leader, according to the source, “was working at the so-called Kirkuk State.”
On Monday, Jabbar al-Maamouri, senior leader with al-Hashd al-Shaabi (Popular Mobilization Forces) said in remarks that the militant group executed some of its members in Salahuddin province for refusing to carry out suicide attacks.

Mutaibija has complicated terrain, with numerous hills that serve as a good hideout for militants. Occasional attacks have been witnessed there by Islamic State against government and paramilitary troops deployments since Iraqi forces, backed by a U.S.-led coalition and PMUs, launched a major offensive to retake areas occupied by IS since 2014.

Iraqi forces, backed by a U.S.-led coalition and paramilitary troops, have been fighting since October 2016 to retake territories Islamic State had occupied. Since then, forces took back the group’s former capital, Mosul, the town of Tal Afar, Kirkuk’s Hawija, and Anbar’s Annah, Rawa and Qaim.