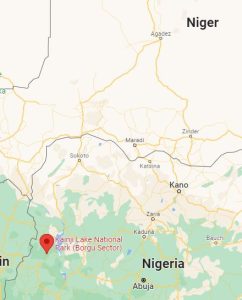 Niger State Government has confirmed the presence of the Islamic State in West Africa Province (ISWAP) terrorists, a splinter of Boko Haram, in Babana community along Kainji National Park, Borgu Local Council of the state. Secretary to the State Government (SSG), Ahmed Ibrahim Matane, disclosed this while briefing journalists in his office in Minna, like reported by guardian.ng.

Matane said that the group had made audio recording, which was in circulation, claiming they were not terrorists or bandits but religious organisation poised to establish caliphate that would handle issues of criminality.

The SSG explained that it was the same group that kidnapped the District Head of Wawa, the Dodo of Wawa. He also said that the group had complained that they were aware of security surveillance within the border area.

Matane further revealed that another group in Shiroro Local Council of the state had resemblance of Boko Haram and ISWAP.

According to him, the group has been preaching that government is irresponsible and brainwashing youths like what they are doing in Sambisa Forest.

In another development, the British High Commission has promised to prioritise its activities in Benue State, most particularly in areas of enthroning peace and security among the people.

British High Commissioner in charge of Governance and Security, Mr. Samuel Waldock, made the pledge, yesterday, during a courtesy visit to Governor Samuel Ortom at the Government House, Makurdi.

Waldock maintained that having keenly observed the security challenges faced by the Benue State government, the High Commission became concerned to know how the state is managing the situation for necessary intervention.

The governor, in his speech, said his administration had made efforts to consolidate on partnership for development of the state with special focus on good governance, security of life and property, promotion of agricultural development, adherence and respect for the rule of law as well as effective collaboration and partnership based on fairness, equity and justice.

Meanwhile, the Attorney-General of the Federation and Minister of Justice, Abubakar Malami, has reiterated the Federal Government’s commitment to vigorously pursue the processes for immediate implementation of reform strategy for national security architecture with a view to providing enhanced institutions for effective service delivery.

Malami stated this when he received members of the Presidential Implementation/Advisory Committee for the Implementation of the Recommendations of the Reform Committee on Ministry of Defence and Armed Forces of Nigeria.

A statement by the minister’s Special Assistant on Media and Publicity, Dr. Umar Jibrilu Gwandu, Abuja, yesterday, emphasised the need for a robust legal and legislative framework, effective inter-ministerial support and up-to-date training as well as enhanced capacity building approaches.

Malami assured the committee of the Federal Government’s determination to have the military and security institutions carry out their duties in the ever-changing and complex society and in compliance with international best practices.

He also assured the committee of determination to provide the desired support, collaboration and co-operation in providing the legal framework for efficient and effective achievements of their goals.