You are here: Home / Mediterranean / “Islamic State in Sinai is close, we must be ready” 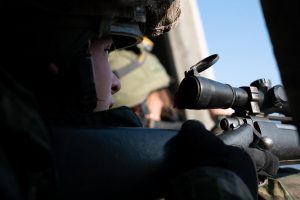 In recent days, an ISIS spokesman released a new audio message, which included a call for jihadist factions in the Sinai Peninsula and in Syria to step up attacks against Israel. ISIS also claimed credit for blowing up a section of an Israeli-Egyptian natural-gas pipeline in the Sinai, like reported by jns.org.

In Egypt’s Sinai Peninsula, the Egyptian military has spent years battling a bloody ISIS insurgency, and while Cairo’s offensive has notched up achievements, the global terror organization’s Sinai branch remains active and dangerous.

The Israel Defense Forces’ mixed-gender Caracal light infantry battalion prepares for that very threat. Through a range of combat drills designed to stop any surprise attack in its tracks and ongoing border-security missions, the battalion works around the clock to ensure that it’s ready to prevent a killing spree in an Israeli border village, as well as neutralize potential attackers.

“ISIS is very close to us on the border fence. We see it. As soon as it decides to do something in our direction, we have to be ready,” Lt. Col. Erez Shabtay, the commander of the IDF’s Caracal (Hebrew for “wildcat”) Battalion, told JNS in an interview.

The fact that ISIS has not recently launched attacks on Israel does not allay Shabtay’s concerns, for the simple reason, he says, “that I do not know when it will happen. It can happen in 10 minutes or six months. For us as a battalion, it doesn’t matter. We have to know that a border incident can occur without warning, and that is the biggest challenge.”

Describing the ISIS threat as tangible, Shabtay said examinations of ISIS attacks in other areas of the region are sufficient to make the threat clear. “As soon as it decides to do something in our direction, we have to be ready. And our working assumption is that we will have no prior intelligence warning—that they will surprise us. This is what the training is all about. All of the training is about scenarios of incidents with no prior warning.”

At the end of January, the Caracal battalion completed a major series of combat drills lasting almost four weeks—part of a larger nine-week training period.

Established in 2004, Caracal is the IDF’s first mixed-gender light infantry battalion, which unlike other infantry units that maneuver into enemy territory has a fixed sector it is designated to defend.

After proving a success, the IDF set up three other battalions based on the same concept, such as the Bardales (Hebrew for “cheetah”) Battalion, which guards Israel’s border with southern Jordan.

‘Defending the border with Egypt’

Soldiers complete four months of infantry training after their basic training and then become specialists in their sectors, gaining knowledge on the local terrain, communities and threats.

“Our main mission is defending the border with Egypt,” said Shabtay. “The Egyptian border is a border of peace, but we have the ISIS Sinai Province on the other side, and this is our main enemy. This is the enemy that we are preparing ourselves against.”

While ISIS has been engaged in roadside bombings and shooting attacks on Egyptian security forces, as well as carrying out a series of mass-casualty attacks on civilians in Egypt, the IDF assumes its guns can be turned against Israel at any time.

“Our concern is that its next target will be IDF forces and [civilian] residents in this sector,” said the officer. “And there are quite a few residents here.”

Every four to five months, the battalion heads out for training drills designed to boost the male and female combat soldiers’ combat fitness, field abilities and marksmanship. “On top of that, we prepare the battalion for attacks by the ISIS Sinai Province,” said Shabtay.

Preparations include weeks of combat drills in open areas, built-up zones, desert valleys and farming greenhouses. Units sleep out in the field for weeks, despite harsh winter storms. The intensity of the most recent drills continued to build as the weeks wore on, and the mental and physical pressure placed on the troops increased.

The scenarios they trained for included ISIS cross-border raids for the purpose of conducting killing sprees in Israeli villages, attacks on IDF forces and posts, and pursuits.

The battalion practiced a rapid deployment and transition from routine to emergency, as well as operational movements, such as a nighttime 15-kilomter trek with full equipment.

‘We are highly mobile and rapid’

“We are highly mobile and rapid. We have lookout units on the border fence—and the lookouts have their own skill set. Unlike battalions that maneuver in enemy territory, we have amassed in-depth knowledge of our sector,” he said.

The unit has access to a network of cameras, radars and an array of other special forces patrolling the area, such as the Border Police’s elite counter-terrorism unit, known by its Hebrew acronym, Yamas.

Caracal’s intimate knowledge of the local communities forms another advantage, he said. “We personally know local community security officers and the members of the readiness squads [volunteer teams of armed civilians in border communities). We hold joint drills with them,” he noted.

Other types of infantry units rotate in and out of their sectors, and are unable to build such close knowledge of the region they defend as a result.

Shabtay also stressed the fact that the battalion has drawn a considerable number of volunteer female lone soldiers from North American cities, including New York, Los Angeles, Montreal and Ottawa.