You are here: Home / MidEastGulf / Islamic State in Sinai: an international issue 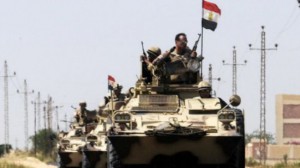 As his term in office winds down, U.S. President Barack Obama is facing one of the most significant challenges of his career. The Islamic State group, which thus far has operated in conflict zones like Iraq and Syria, has for the first time initiated activity in a sovereign country with a strong army — Egypt.

The comprehensive and meticulously planned terrorist attack carried out last week against the Egyptian army in the Sinai Peninsula killed dozens of soldiers. Along with the loss of human life and the damage done to the Egyptian army’s reputation, the incident could lead to overall change in a volatile Middle East: the expansion of Islamic State activities to other sovereign states in the region with the goal of causing their collapse.

However, a comprehensive and decisive move by the international community with the United States at the helm could reshuffle the deck and curb the terrorist organization’s spread. This strategy would serve the Egyptian interest of returning calm and reinforcing sovereignty in Sinai, as well as the American interest of stopping and rooting out Islamic State in the region.

An exhaustive strategy should use the incidents in Egypt as a case study and operate on three fronts. The first would be declaring full backing and support for the Egyptian struggle against Islamic State and lending legitimacy to Egyptian army activity in the Sinai — statements by international leaders, led by the U.S. president, about Islamic State’s illegitimacy along with declarations of support for Cairo’s right to operate against the terrorist group would serve this purpose. With this backing, the Egyptian president will be able to turn to his public and to other Arab countries for support for his actions. This kind of support may also lead Egypt back to the West after its recent back-and-forth between Washington and Moscow.

The second would be providing logistical and military support for the Egyptian army. The U.S. must lift the restrictions it previously placed on selling and transferring advanced weapons systems to the Egyptian army under the claim of human rights violations. The situation calls for jumping that hurdle temporarily and reinforcing the military capability of the Egyptian army so that it can deal with the great challenge that Islamic State poses to the integrity of its republic. The U.S. military should also provide the Egyptian army with quality intelligence, air targeting assistance and the use of other specialized military equipment that could help in the struggle.

With American encouragement and backing, Israel can expand its intelligence assistance to the Egyptian military, and it will be possible to bring in more troops and equipment to Sinai, bypassing the peace agreement between the two countries. This cooperation would, of course, need to be done secretly, to prevent making the Egyptian president and his regime appear as if they are collaborating with “the Zionists and the Americans.”

Third, the international community, led by the U.S. must look at the incident in Sinai as a case study that demonstrates the need for the provision of a comprehensive defense umbrella for stable countries in the region against Islamic State. If the Americans hesitate, Morocco, Jordan, Saudi Arabia and other Gulf states will face a similar challenge, which could ultimately lead to their collapse. Therefore, Washington must work with the leaders of these countries to deal with the future danger their regimes will face at Islamic State’s hands.

Failed American policy in the Middle East — from Libya, to Egypt, Syria and Iraq — has bred turmoil in the region. The United States must not repeat its past mistakes of avoiding involvement in conflict situations and allowing local forces to deal with the hegemonies in various countries. Repeated American failure will cost Egypt, Israel and the entire international community far too much.

This proposed strategy is in line with the current American strategy against Islamic State, which is designed to stop the group’s spread and to diminish its presence until it is completely annihilated. Failure would certainly lead to the organization’s proliferation. Therefore the U.S. and the international community must not allow Cairo to deal with this issue alone. If Egyptian President Abdel-Fattah el-Sissi’s regime collapses, it will come at a very high price to Egypt and to the entire region.