You are here: Home / Mediterranean / Islamic State in Libya: ‘They’re getting stronger because no one is fighting them’ 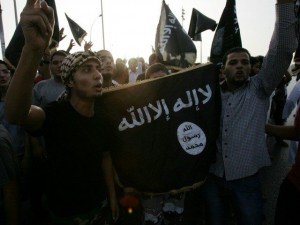 “They’re getting stronger because no one is fighting them,” Libyan military commander Mahmoud Gazwan said of the Islamic State, in an interview with Reuters. Libyan officers are pleading for more Western help defeating the terror state.

Gazwan’s forces are trying to defend the city of Misrata with “little more than gun-mounted pickup trucks.” ISIS has a stronghold in Moammar Qaddafi’s birthplace of Sirte, and they are active from Benghazi in the east to Sabratha in the west.

A brutal attack on Sabratha this week has been seen as an important sign of the escalating ISIS threat. Given that port city’s role as a hub for Libyan migrants pouring into Europe, Islamic State activity there will stoke fears of ISIS operatives slipping into the refugee tide.

Reuters writes of increasing U.S., British, and French support for Libyan forces against ISIS, including drone deployments, recon missions, and airstrikes, along with rumors of special-forces raids, but so far there has been no serious talk of a major ground deployment.

The core problem in Libya is the divided government. Halfway through the Reuters piece, we learn the commander who complained that nobody is fighting ISIS works for the Islamist gang that kicked the legitimate government out of Tripoli in 2014. They are not the most organized group of warlords, as the Misrata faction supports the most recent U.N. proposal for a unified government, while the Islamist “political leadership” in Tripoli is opposed.

Much hope was expressed that the Libyans were finally on the road to building a unity government when that U.N. proposal cleared the first hurdles, following a few failed efforts, but now the United Nations and Western leaders are once again grinding their teeth in frustration, while the Libyans struggle to move the unity plan through their parliament.

Reuters quotes an unnamed Western diplomat grousing that “patience is very short with the House of Representatives,” because Western governments “require forces on the ground that we can help and train” against ISIS.

Libyan forces are saying that if they are not provided with more weapons and support soon, they will not be able to keep the Islamic State at bay. The West does not want to indulge divided government, especially with an expressly Islamist militant faction.

There is apparently hope that the horrors of ISIS will motivate the Libyans to set aside their differences and get that unity government up and running, with Reuters taking it as a positive sign that feuding Libyan forces were willing to fight together to eject Islamic State militants from Sabratha.

The Atlantic notes U.S. intelligence estimates that ISIS strength in Libya has more than doubled since last fall, with up to 6,500 fighters now seeking to exploit the chaos between Libya’s warring factions. European powers with close proximity to Libya, including Italy and France, are considering stronger measures to counter the Islamic State, but it is not clear if they could legally send troops into Libya without a formal invitation from a national government that does not exist.

On Thursday, Director of National Intelligence James Clapper told the House Intelligence Committee that U.S. efforts to stymie ISIS were complicated by “a wide range of views among the political spectrum in Libya.”

“We’d like nothing better than to have a government in place in Libya whom we could work with and from whom we would gain consent for engaging militarily in Libya,” said Clapper, as quoted by The Hill. “That is a subject of active discussion as I speak.”

“You cannot put off the counterterror operations as this long process of government-building takes place,” said CIA Director John Brennan. But that is exactly what the U.S. and its European allies are doing, while the clock ticks down toward a potential surge of Islamic State forces from Syria and Iraq into a new Libya-centered “caliphate.”