You are here: Home / Mediterranean / Islamic State in Libya: mobile, deadly and still has big ambitions 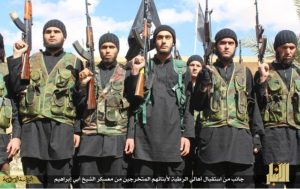 It was a gray Wednesday morning in Libya’s capital, Tripoli, when the shooting started. The employees at the election commission headquarters in the upscale Andalus district were startled and became even more alarmed as the shooting grew heavier and drew nearer. When the explosions began to thunder, shaking the buildings in the compound, the dread grew into panic: they knew they were under attack by ISIS, or some equally nefarious group, like reported by thedailybeast.com.

“We were inside one of the administration buildings and we moved to one of the offices and stayed inside,” said an employee of an organization affiliated with Libya’s election commission. She spoke to The Daily Beast from Tripoli by phone, shortly after the May 2 attack, on the condition she not be named. “It was just horrific.”

There was a method to the rampage which, according to a security official in Tripoli, lasted no more than 15 minutes and involved two fighters who blew themselves up before they could be killed or detained. They went straight for the facility housing the computer that stores the names and addresses of Libya’s voters. The attack was meant to sabotage elections scheduled to be held sometime this year which are an effort to stitch the fractured country back together.

“They knew where they were going,” she said. “They blew up the building that had the database.”

At least 16 people were killed and some 20 others wounded in the assault on Libya’s High National Election Commission. It was the first major attack in Tripoli claimed by the so-called Islamic State since September 2015. Then, less than a week later, ISIS claimed a May 8 suicide car bomb east of Sirte that killed two security personnel and injured three. Last Wednesday it claimed two attacks in the country’s east, targeting checkpoints near Ajdabiya and Awjila, killing at least two soldiers loyal to the faction controlling that part of the country.

All indicators suggest the group is growing and sees Libya as a potential base for regional operations.

“We’re seeing a restoration of the group under new conditions,” said Geoff Porter, a North Africa specialist at the Combating Terrorism Center at West Point. “They’ve restored their capabilities and are intent to use them.”

For a while, ISIS appeared to be in retreat in Libya. The jihadis had gained ground in the chaotic aftermath of the NATO-backed toppling of Muammer Gaddafi in 2011 at the hands of homegrown rebel fighters. In the ensuing chaos the U.S. ambassador to Libya and three other Americans were killed in a violent 2012 riot centered on a U.S. diplomatic outpost in Benghazi. Exploiting infighting among various anti-Gaddafi factions and rifts that resulted in several competing governments, ISIS managed to win control of important enclaves in the vast oil-rich country, including Sirte, the central Libyan coastal city that was Gaddafi’s hometown.

In December 2016, Backed by U.S. airstrikes and commandos, local militias drove ISIS’s Libya affiliate out of Sirte, raising hopes that the jihadi group’s presence in the north African country would fade. In 2017, ISIS managed to pull off only four operations.

But less than five months into 2018 ISIS already has launched at least 10 attacks. Though it has been downgraded without control over coastal cities, it remains a potent force.

“They’re a little more agile, sharper and more flexible in the way they operate,” said Anas el-Gomati, director of the Sadeq Institute, a Libyan think tank. “And they’re much more difficult for a security apparatus to monitor. Their size is smaller but their potency is increasing. We have to contrast their downscaling as an organization and their upscaling in impact.”

Ahmed Bin Salem, spokesman for the Reaction Force, a militia that controls much of the capital, told The Daily Beast that security forces have been tracking ISIS fighters from both Sirte and eastern Libya as they attempt to set up cells inside Tripoli. “We have to focus on who is coming to Tripoli,” he said. “We are collecting a lot of intelligence.”

ISIS’s Libya branch numbers between 600 and 800 fighters and is growing, recruiting jihadis from the Sahel region of Africa, as well as drawing veterans of the Iraq and Syria conflicts, said Wolfgang Pusztai, a former Austrian security official who advises companies operating in Libya. For now, Libya serves as a showcase to draw supporters and attract jihadis looking for a fight. Witnesses described the fighters in the election commission attack, later named by ISIS as Abu Ayyub and Abu Tawfiq, as dark-skinned, possibly hailing from sub-Saharan Africa or southern Libya.

“They’re strategic objective is to use the southern part of Libya as a haven,” said Pusztai. “What they’re doing right now in Libya is rather small-scale. They have no intent to regain territorial control. They want to stay in the south and they need to conduct some attacks to prove to their financiers that they’re still here and still valuable. Ultimately, they want to regroup and launch attacks outside Libya.”

This week French president Emmanuel Macron is hosting a conference in Paris to try to draw Libya’s warring factions into a settlement. Libya’s cracked political and security architecture offers ISIS far too much room to maneuver. Khalifa Haftar, a military strongman backed by Egypt and the United Arab Emirates, rules much of the east of Libya, including the major city of Benghazi. A collection of regional and Islamist militias and political groups that include the local affiliate of the Muslim Brotherhood dominate the West and the capital. The port of Misurata, the country’s number three city, is virtually autonomous. The various powers are currently fighting over control of the south, source of the country’s water and oil wealth.This month, at least four people were killed and a dozen injured in clashes between rival forces in the Sabha area, according to local media.

A feeble government backed by the United Nations and based in Tripoli attempts to draw the various sides into a political compromise. The oil industry pumps out about a million barrels a day, which the Central Bank uses to pay bills and barely keep the country afloat.

Life in Libya remains a mess, with a resurgent ISIS only adding to the misery of ordinary people. Residents describe shortages of food products and fuel, and power cuts already stretching longer as the summer months approach. The Libya dinar, worth as much as 1.2 to the dollar before the 2011 uprising, has collapsed to about 7 to the dollar on the black market.

“It’s survival mode. It’s day-to-day,” Adel Dajani, a Libyan investment banker based between Tunisia and London, told me a few weeks ago. “No one can think medium-term, forget long-term. It’s let’s try to get money out of the bank. Let’s hope salaries get paid on time. Let’s hope schools are safe. Ramadan is coming and there’s no money. Summer is coming and there are electricity shortages.  Prices are very expensive. Inflation is horrendous.”

Opportunistic warlords and political leaders fight ISIS only as a means of maintaining their own power, and may even have an incentive to keep the threat of the group alive, said the Sadeq Institute’s Gomati. “There is no single security institution or intelligence apparatus that has [fighting] ISIS on its mind,” he said. “What they do have on their mind, is how to use ISIS to their advantage.”

Adding to the country’s woes, analysts say U.S. and Western officials have all but abandoned Libya, creating even more space for ISIS or other north African militant groups. While the U.N.-backed government has little domestic support, the U.N. mission to Libya has little international support. France and Italy are pursuing their own policies, brokering deals with individual warlords to keep migrants and militants away from their own borders. The U.S. has named neither a Libya ambassador nor a special envoy.  “To the extent that the U.S. has a Libya policy, it’s a counter-terror strategy that’s part of a broader north Africa strategy,” said Porter. “The U.S. sees Libya as a purely military problem and ignores the political dimension.”

The U.N.-backed government, led by Fayez Serraj, the scion of a prominent Tripoli family, is still banking on a referendum on a new constitution and general elections this year as the path forward. This was the plan hammered out by Libyans in late 2015 as part of a transition process. ISIS may have thought that vision went up in flames in its attack on the election commission database in Tripoli this month. But a source close to the commission said at least four back-up copies of the voter rolls exist.

The woman at the election commission told The Daily Beast that the attack on their office will only steel their resolve. “These people lost their colleagues; some of them have been working together since 2012,” she said. “They all want to move ahead. I think the elections will move forward. I don’t think any attack will stop it.”