You are here: Home / West Asia / Islamic State in India: the Jihadist reboot 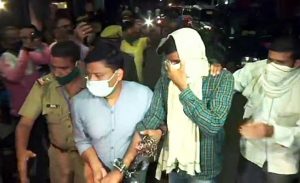 Arrests of two persons associated with the Islamic State, within a week, has brought back attention on the undiminished threat of the global jihadist organisation to India’s national security, like reported by rediff.com.

While 28-year-old Abdul Rahman, working as an ophthalmologist at a Bengaluru medical college, was arrested on August 18, Mohammed Mushtaqeem Khan, aged 36, was arrested in New Delhi with IEDs and explosives following a brief exchange of fire with the Delhi police on August 22.

Rahman had reportedly visited an IS camp in Syria to treat injured fighters.

Khan had never left Indian shores and had reportedly taken up the role of being a lone wolf fighter on the advice of an IS recruiter.

Since its founding in 2014, the IS in Iraq and Syria has posed a rather subdued threat to India.

Its repeated calls and outreach to Indian Muslims have largely been ignored.

Close to 200 people have either left the country or have attempted to do so to join the group.

This has been interpreted as a failure of the global jihadist force, whose appeal to the Muslims of Europe, Africa and even South East Asia have been far more successful than those in South Asia.

Even in Kashmir, a theatre of jihadi groups, the IS as well as the al-Qaeda phenomenon has not been able to find significant support.

The cyber wings of intelligence agencies as well as those of state police establishments have done well to arrest self-radicalised individuals and bust modules.

Individual state police wings have been able to infiltrate into chat rooms, social media groups to track online communication, activities and exchanges of IS recruiters.

While the government does not stress much on either unleashing a counter-messaging to the IS propaganda or engaging in a de-radicalisation initiative, adequate promotion seems to have been given to tracking and neutralising the online recruitment efforts.

And till now, this approach has been successful.

What, the IS, however, has succeeded, through its regular online propaganda and recruitment efforts, is to create a rather dispersed band of followers in several states of the country.

While a few of them are linked to a common recruiter and have operated with a vague sense of unity, most others like Rahman and Khan have been lone wolves, using their motivation, skills and energy to further the cause they believe in.

Amid the sporadic and intermittent nature of their operations a degree of sophistication is clearly visible.

Compared to other cadres arrested previously who were still in their planning stage or had access only to basic weapons, Khan reportedly had learnt to assemble pressure cooker IEDs online and had even carried out a test in his village.

Rahman, the ophthalmologist from Bengaluru, was developing a weapons-related mobile app to benefit IS fighters.

In contrast, Mehdi Masroor Biswas, the IS sympathiser who was arrested in December 2014, used his twitter handle @ShamiWitness mostly for propaganda purposes.

For long, security as well as academic interest has been centred on the ‘South Indian’-ness of the Islamic State, buttressed by the fact that overwhelming majority of the IS operatives who have travelled out of the country or have been arrested are from the four southern Indian states.

However, this trend could possibly be undergoing a tectonic shift.

Number of arrests of IS cadres in the recent past have either been from Uttar Pradesh or have links with that state.

Khan belonged to a small village in Balrampur, UP.

Members of a 10-member IS module, named Harkat-ul-Harb-e-Islam (HUHI), arrested in April 2019, belonged to Amroha and Meerut.

HUHI’s efforts to carry out a massive attack in the national capital arguably remains the most sophisticated attempt by IS operatives in recent times.

Close to 25 kilograms of explosives had been recovered from them.

In 2016, four members of another IS-inspired module, Junud-ul-Khalifa-e-Hind (JUKH, Soldiers of the Caliph in India), had been arrested from Haridwar.

Similar to the HUHI, the JUKH too was attempting to indulge in terror strikes in major cities across India.

Other cities where IS cadres have either been arrested or killed include Lucknow, Saharanpur, Kushinagar and Azamgarh.

The impact of the online propaganda and recruitment efforts seem to have found a degree of resonance in the erstwhile SIMI/Indian Mujahideen cadres, who are reviving their old linkages, at a time of their own choosing.

This UP phenomenon, if true, could have larger security implications on the National Capital Region compared to other mega cities.

The ephemeral palaver in the media centering around individual arrests of IS cadres notwithstanding, threat of global jihadist outfits to India’s national security has been under played in the policy making circles.

The arithmetic division of the number of known IS sympathisers by the total Muslim population in the country has remained a much (mis)used method to down play the threat.

While such a public posturing does have its utility in limiting the IS narrative in media space, the policy making apparatus need to take cognisance of two critical points.

First, unlike 2017, the narrative on Islamic State is no longer that of a vanquished force, but one that has orchestrated a dramatic revival in several new theatres around the world, aided by the West’s early declaration of victory.

This could be providing a fillip, reigniting some short of a jihadist reboot, for those who wish to identify themselves with it.

Second, the group continues to harp on the importance of lone individuals in executing terror.

Its online publications earlier this year delved on of how the coronavirus pandemic has created unique opportunities for inclined individuals to plan and execute attacks.

This has a potential to shape thought processes of the DIY brand of terrorists, who sense an opportunity for themselves.

The undiminished threat, therefore, has the potency of sustaining itself in multiple ways in the near and medium term.