You are here: Home / Europe / Islamic State in Hungary? As refugees enter Europe, officials fear Islamic State militants could be among them 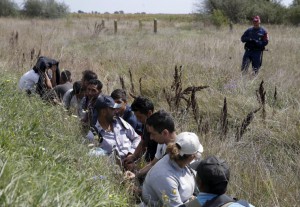 European officials have expressed increasing concern that militants from the Islamic State group, also known as ISIS, are posing as refugees to enter the European Union as those countries take in hundreds of thousands of refugees from Syria, Afghanistan and beyond, fleeing civil wars and violence. Media reports appear to have bolstered those fears, with Hungarian media reporting Tuesday that “Islamist terrorists, disguised as refugees, have showed up in Europe,” RT reported.

“Pictures were uploaded on various social networks to show that terrorists are now present in most European cities,” Hungarian M1 television reported. “Many, who are now illegal immigrants, fought alongside Islamic State before,” it added. It was unclear if the suspected militants had been arrested or detained.

Hungary has come under the spotlight in recent weeks for trying to stem the tide of refugees from the Middle East and North Africa, including by preventing them from boarding trains to Germany, Al Jazeera reported. At the same time, the possibility that militants and fighters could be scattered among humanitarian refugees presents a serious concern for European cities and countries.

The right-wing British politician Nigel Farage suggested Friday that the refugee crisis could endanger the country and continent, as there was “very genuine fear” that Islamic State militants could use the flow of refugees to their advantage and enter the European continent. “At the moment, the EU’s common asylum policy has absolutely no means whatsoever of checking anybody’s background, and I would say we must not allow our compassion to imperil our safety,” he said, the Telegraph reported.

Experts have suggested that European officials should be vigilant about possible militant threats but also remain aware that Europe’s borders have long been relatively porous, and refugees have sought asylum within them for years. “It’s a concern that people at borders are always going to have to be vigilant about and at the same time grapple with,” Sean Kay, a professor of international relations at Ohio Wesleyan University, told International Business Times Tuesday.

Others suggested that the outpouring of refugees represented a religious victory for the Islamic State group, which controls large swaths of Iraq and Syria. As the militant group drives Muslim and Christian men, women and children from their homes and out of their countries, “if all these refugees come to Europe or elsewhere, then Islamic State has won,” French Foreign Minister Laurent Fabius said Tuesday. He called for the Middle East to remain what he defined as “a region of diversity where there are Christians, Yazidis, etc.”