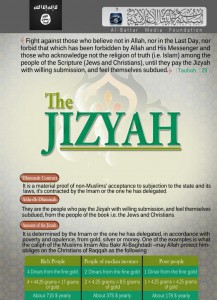 The Islamic State of Iraq and the Levant has imposed the jizyah, or special tax on non-Muslims, on the Christians of the central Syrian town of al-Qaryatayn, according to the Syrian Observatory of Human Rights and Avvenire, the Italian Catholic newspaper.

The militant group captured the town on August 5 and subsequently destroyed the fifth-century Monastery of St. Elian, desecrating the relics of the saint.

In levying the jizya, the Islamic State also imposed 13 conditions on the town’s Christians, including bans on the possession of weapons and the establishment of churches and monasteries.