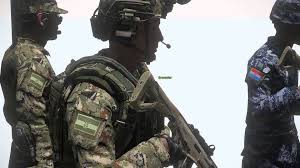 The circulation of a picture Wednesday showing a Croatian man who was purportedly beheaded by the Egyptian affiliate of the Islamic State group could prompt military action against the terror group by Croatia and Egypt. The group, which operates in the Sinai peninsula of northeastern Egypt, distributed the picture showing the body of geologist Tomislav Salopek, who was kidnapped just outside of Cairo in mid-July.

ISIS had made Salopek’s release contingent on Egypt releasing all Muslim women in its prisons within 48 hours. It’s not clear when Salopek was killed. A spokesman from the Egyptian Interior Ministry said, “We have seen this news online but are currently making our own checks. If we confirm that it is indeed true, we will inform the media through a statement.”

Egypt has been fighting Islamic militant groups for years, but President Abdel Fattah el-Sisi has shown extra resolve after ISIS began staging deadly and effective attacks on its soil in recent months. An ISIS attack on Egyptian forces in July left 21 dead and hundreds injured. In the immediate aftermath, the government moved quickly to condemn all terror groups in the country while also vowing swift vengeance against those responsible. Sisi also hinted that he might hurry the death sentences handed down to ex-President Mohamed Morsi and hundreds of other members of his Muslim Brotherhood, which Sisi outlawed.

The alleged murder of Salopek on Egyptian soil offers Sisi an opportunity to request greater international assistance in the overall fight against ISIS, said Shashank Joshi, a senior research fellow and expert on international politics at the Royal United Services Institute in London.

“This is a regional issue,” said Joshi. “Egypt wants support not just for its domestic policies but also for broader crackdown on Islamist terror groups across the region, including places like Libya.”

The question of how Croatia might respond to the killing of its citizen could be answered just by looking at its military. Croatia has been a member of NATO since 2009 and currently has around 170 personnel in Afghanistan. But with just 17,500 personnel in total and a defense budget of around $704 million annually, the country is ill-equipped to offer any meaningful assistance to the U.S.-led coalition forces fighting ISIS in Syria and Iraq. Such is the military’s financial problems, the Air Force has sent its Soviet-era MiG-21 jet fighters, the last of them built in 1985, to be overhauled in war-torn Ukraine.

However, the country might be well positioned to offer training and equipment to Kurdish groups fighting ISIS in Iraq and Syria. Croatia’s relatively outdated Soviet-era military shares a number of weapons with the Kurdish peshmerga, who have been crucial to the battle against ISIS led by the United States. This could enable Croatia to provide training, along with equipment and supplies that the peshmerga could use effectively against ISIS.

If Croatia did enter the U.S.-led coalition against ISIS, it would join a number of countries that have been prompted to act by terror attacks inside their borders or the kidnapping of their nationals. The United Kingdom, for example, first passed a vote to bomb ISIS in Parliament just two weeks after the beheading of British national David Haines in mid-September. France increased its involvement after hiker Herve Gourdel was killed by the terror group at the end of September.

After the death of Jordanian pilot Muath al-Kasasbeh, who was burned to death inside a cage, Jordan temporarily took the lead on the U.S.-led airstrike campaign in Syria and Iraq against ISIS. Over three days in February, the country’s military said it killed 7,000 ISIS militants and degraded around 20 percent of the group’s military capability. By comparison, the U.S. has conducted around 44,000 sorties between August 2014 and July 2015.

“While Croatia doesn’t have a great deal of military firepower to offer, it’s eminently possible that for domestic political reasons, much like Britain, it will show some sign of resolve in the general fight against the group,” Joshi said.