You are here: Home / Mediterranean / Islamic State hit hard in Libya, but al-Qaeda stronger than ever 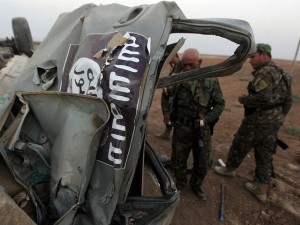 Thomas Joscelyn, senior fellow at the Foundation for Defense of Democracies and Senior Editor of the Long War Journal, told the House Foreign Affairs Subcommittee on Terrorism, Nonproliferation, and Trade on Tuesday that the Islamic State has suffered major setbacks in its Libyan stronghold of Sirte.

Its influence has not been purged from the country, however, and the Islamic State’s grandfathers and rivals in al-Qaeda are pursuing a highly successful clandestine strategy.

Joscelyn said ISIS is “on the verge of losing its safe haven in Sirte,” which would be “a major blow to the so-called caliphate, as Abu Bakr al Baghdadi’s organization has invested significant resources in this state-building project.”

However, he warned that ISIS would “retain a presence inside Libya,” through cadres in cities such as Benghazi, even if they are cleaned out of Sirte. He also noted that liberating Sirte has been a much longer and more difficult effort than anticipated by the Libyan government, requiring both a “robust commitment by local Libyan ground forces” and over 170 U.S. airstrikes to date.

Considering that ISIS turned out to have less manpower in Sirte than originally believed, and has evacuated many of its fighters to save them when the city is retaken, this is a grim testament to how potent ISIS will remain as a threat to Libya’s unity government. The Islamic State is distressingly adept at making its adversaries wage bloody door-to-door battles for the territory it seizes.

Joscelyn explained that Sirte has enormous symbolic value to the caliphate, which bases its legitimacy on its ability to seize and hold territory openly, which is precisely the philosophical difference that makes al-Qaeda a more persistent long-term threat.

Joscelyn’s observations on al-Qaeda are intriguing and well worth reviewing at length, but, in essence, he says their strategy involves slowly, patiently, and quietly spreading their influence through host countries they infest, never presenting the kind of target ISIS does. They are even willing to distance affiliates and satellite groups from the host organization, which is the polar opposite of the Islamic State’s penchant for bragging about oaths of loyalty to the caliph, secured from subordinate extremist groups.

Al-Qaeda is also skilled at spreading jihadist ideology without tipping its hand, which is again very different from the ISIS strategy of putting the caliphate first, making its politics indistinguishable from its ideology.

One of Joscelyn’s major recommendations to Congress was for the U.S. government to help “expose al-Qaeda’s network inside Libya,” because “sunlight is a key part of any plan to combat al-Qaeda’s clandestine strategy.”

A key passage in Joscelyn’s testimony emphasizes the differences between the approaches of the two terror states:

Unlike the Islamic State, which advertises and even exaggerates its presence in some areas, al Qaeda is keen to avoid scrutiny. Al Qaeda has developed an entirely different strategy for operating in countries such as Libya. Al Qaeda sees jihadi state-building as a long-term endeavor that requires strategic patience. The Islamic State deliberately played off of this strategy to quickly grow in size, capitalizing on younger jihadis’ and new recruits’ impatience. In essence, the Islamic State marketed itself by asking a simple question: Why wait for al Qaeda’s caliphate to come in the future, or maybe never, when you can come fight for the “caliphate” today?

The Islamic State’s approach allowed it to mushroom in the short-term, but its long-term liabilities are now being exposed in Iraq, Syria and Libya. Al Qaeda knew all along that the Islamic State’s caliphate claim would prove to be tenuous, and al Qaeda’s strategy will now be vindicated in some jihadis’ eyes. In this section, I am going to reference three key documents to illuminate al Qaeda’s strategy. All three of them were produced by either AQIM or another part of al Qaeda.

“AQIM” is al-Qaeda in the Islamic Maghreb, whose emir, Abdulmalek Droukdel, proved a perceptive critic of the flaws in the Islamic State’s approach. Droukdel thought the ISIS hotheads were jumping the gun by creating a visible caliphate while the Western powers and their Middle Eastern allies were still strong enough to tear it down.

Instead, he thought al-Qaeda should continue quietly building durable alliances with various tribes and extremist groups, ultimately co-opting the religious and civil institutions of various nations — an easier task in the Islamic world, where religious and civil institutions are usually linked — until the time was right to impose al-Qaeda’s version of sharia law, creating a de facto caliphate long before any such Islamist super-state was formally declared.

The al-Qaeda strategy is to change targeted societies slowly until they are no longer capable of resisting Islamist control, rather than swiftly imposing it by force, as ISIS has done. Joscelyn introduces considerable evidence this strategy is still being pursued in Libya now, while the unity government and U.S. military busy themselves with defeating ISIS.

One of al-Qaeda’s goals is to quietly take control of militant groups that are actually allied with the unity government and West against the Islamic State at the moment — not just in Libya, but in Syria as well. In fact, Joscelyn says the “re-branding” of al-Qaeda’s franchise in Syria, the Nusra Front, into a supposedly independent group was done “in an attempt to further embed al Qaeda within the Syrian insurgency and to stymie American counterterrorism efforts.”

Joscelyn warns that al-Qaeda seeks to use the increased Western military presence in conflict zones like Syria, Iraq, and Libya as propaganda fuel for increasing its own power. Western forces inserted to help local governments battle ISIS become fodder for al-Qaeda’s poisonous whispers of resentment about foreign intervention.