You are here: Home / MidEastGulf / Islamic State, Hezbollah in fiercest fighting yet 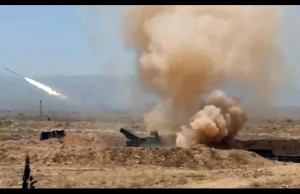 Hezbollah repelled an ISIS attack in northeast Lebanon, losing eight fighters and killing at least 14 jihadis, in the largest confrontation between the two groups since the Lebanese party joined the Syrian war three years ago.

Speaking to The Daily Star, a March 8 source said ISIS launched a pre-emptive assault on Hezbollah posts in the outskirts of the village of Ras Baalbek, in an attempt to thwart a planned offensive against the Islamist militants holed up in the rugged mountains around the northeastern town of Arsal.

“They carried out a pre-emptive attack because they knew that Hezbollah would eventually attack them. They wanted to take over some positions and impose new facts on ground,” said the source, who asked to remain anonymous. “But Hezbollah foiled their attack because it was vigilant about their plans.”

The source described the ISIS attack as a “big failure,” noting that it represented the first “comprehensive confrontation” between ISIS and Hezbollah since the party joined the Syrian war.

“It is the heaviest loss ISIS has sustained since fighting [with Hezbollah] began,” he added.

According to the report, some of the ISIS casualties came as they set off mines, planted outside the village by Hezbollah.

A security source told The Daily Star that eight Hezbollah fighters were killed in the fighting, adding that the party captured at least three ISIS militants.

Al-Manar reported that Hezbollah fighters had shelled a gathering of ISIS militants on Arsal’s eastern outskirts, killing the group’s “most notable leader in Qalamoun,” identified as Saudi national Walid Abdel-Mohsen al-Omari. The report added that four other ISIS militants were also slain in the shelling.

Ras Baalbek is situated about 7 kilometers north of Arsal.

Al-Manar claimed that five of ISIS’ military vehicles, several motorcycles and a bulldozer were destroyed, along with a rocket launcher and an artillery battery.

Just over a month ago, Hezbollah and the Syrian army launched an offensive in Syria’s Qalamoun region, which straddles the border with Lebanon, and have since driven Nusra Front fighters and their allies from two thirds of the hills in the area, according to Al-Manar.

At least 31 Hezbollah fighters and 196 Nusra Front militants have been killed in the battles, a security source told The Daily Star Tuesday.

For the past week the Qalamoun battles have focused on Arsal’s eastern and southern outskirts, and on the western outskirts of the Syrian town of Flita, which lies roughly 23 kilometers southeast of Arsal.

ISIS has controlled Arsal’s northern outskirts since last year, while the Nusra Front has deployed in its eastern and southern outskirts.

Most of Hezbollah’s fighting has been against the Nusra Front and its allies, but the party’s leader Sayyed Hasan Nasrallah said last week that the upcoming battle would be with ISIS, outside Arsal.

“This is a professional group. ISIS will not wait for Hezbollah to attack its positions,” said Hisham Jaber, a retired Lebanese Army general.

“According to military science, attack is the best means of defense,” he told The Daily Star, adding that he expected ISIS to attack Lebanese territories again.

The same source noted that the military had deployed heavily along the border, particularly between Al-Qaa and Ras Baalbek.

The Nusra Front’s top Qalamoun commander warned that Lebanese servicemen being held hostage on Arsal’s outskirts would share the same fate as their captors should Hezbollah or the Army enter the area. “As long as they are with us, they are safe, and we protect them like we protect our men and our sons,” Abu Malek al-Talleh told the family of Lebanese captive Georges Khoury when they visited their son in the outskirts of Arsal Monday night, according to footage released Tuesday by Al-Jadeed.

“But if God wishes that they [Hezbollah or the Lebanese Army] arrive here and that this place becomes a battlefield, we will have no role after that,” Talleh said. “The matter would then be beyond our control, and what will happen to us will happen to them.”

The Nusra Front has held 16 Lebanese policemen and soldiers hostage since August. ISIS holds another nine servicemen captive outside Arsal.

Talleh said the Nusra Front would not use the captives as human shields, but warned they would not survive a rescue attempt.

“We are true until the last breath, and they will not be able to enter these areas except over our dead bodies. And when I say over our corpses, it means over your sons’ corpses as well … it means your sons will no longer exist.”

Talleh said he remained optimistic that the captives could be released in a deal with the Lebanese government, but accused the authorities of lying.

“There are no negotiations or anything of the sort. They are lies, and nothing but lies.”

He said the only thing his group had asked for in exchange for the captives was the release of Islamist women held in Lebanese prisons. He also accused the Lebanese Army of shelling Nusra posts alongside the Syrian army.

Talleh said his rare appearance on camera was “for you to see me on the outskirts,” after Al-Manar claimed Monday that he was hiding inside Arsal. He said his group would not enter the town, even if faced with a military advance. “Arsal will not be a battlefield, whatever the price.”

“The bone breaking will be here, on the outskirts,” said Talleh, who claimed there were roughly 1,000 Islamist militants around Arsal.