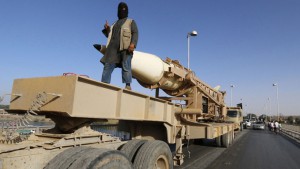 Australia’s foreign minister, Julie Bishop, has voiced concerns over the possibility of the Islamic State group to build chemical weapons. There have been several reports of ISIS using toxic chlorine gas in homemade bombs in Iraq and Syria.

“The use of chlorine by Daesh [an Arabic term for ISIS], and its recruitment of highly technically trained professionals, including from the west, have revealed far more serious efforts in chemical weapons development,” Bishop said late on Friday in Perth.

“Daesh is likely to have amongst its tens of thousands of recruits the technical expertise necessary to further refine precursor materials and build chemical weapons,” she said.

Chlorine gas is a strong oxidizer, which may react with flammable materials. The toxic gas, which was first used as a weapon during WWI by Germany, is on the banned list of chemicals under the 1997 Chemical Weapons Convention.

Kurdish officials said its peshmerga fighters, busy reinforcing their positions on a highway between Mosul and the Syrian border, came under attack from an IS suicide bomber driving a truck filled with toxic chlorine gas late January. Authorities say their forces destroyed the truck with a rocket before it had a chance to detonate near soldiers.

Shortly after the attack, the Kurdish fighters began to complain of “nausea, vomiting, dizziness and weakness” – all common symptoms of chlorine poisoning. Soon they found “20 empty canisters” in the back of the attacker’s vehicle.

The Kurds, who have been battling against Islamic State militants since last year, sent the remains of the suicide bomber to a laboratory, which said “the samples contained levels of chlorine that suggested the substance was used in weaponized form.”

The Organisation for the Prohibition of Chemical Weapons (OPCW), the chemical weapons watchdog, conducted a fact-finding mission in neighboring Syria last year, where ISIS has been fighting against the Bashar Assad government. According to the OPCW probe, chlorine was used “systematically and repeatedly” in Syria in 2014.

The report stated that chlorine was used in attacks on the villages of Talmanes, Al Tamanah and Kafr Zeta, all located in northern Syria.OPCW said that “the descriptions, physical properties, behaviour of the gas, and signs and symptoms resulting from exposure, as well as the response of patients to the treatment leads” lead it conclude with a high degree of confidence that “chlorine, either pure or in mixture, is the toxic chemical in question.”
Last year, 11 Iraqi police officers were taken to hospital after an ISIS chemical weapons attack, with the Defense Ministry and doctors later confirming their diagnosis was poisoning by chlorine gas. According to a Washington Post report, the Islamic State militants’ chlorine gas attack occurred on September 15, in the town of Duluiyah, located north of the capital.

The plant harbored 2,500 degraded chemical rockets, formerly filled with a weapon of mass destruction, sarin, and other chemical agents. The Iraqi government told the UN that as a result of the takeover of the plant, Iraq was unable to fulfil its obligations to destroy chemical weapons.

Alhakim’s letter to the UN mentioned two specific bunkers, whose contents came to be revealed by the AP via a 2003-era UN report. While in Bunker 13, there were 2,500 sarin-filled chemical rockets – all produced before 1991 – and 180 tons of the “very toxic chemical” sodium cyanide, Bunker 41 contained 2,000 empty artillery shells that were contaminated with mustard gas; over 600 one-ton mustard containers holding residue, and severely contaminated construction material. These could not be used for warfare, but they were still “highly toxic.”

US officials has said that whatever was still in the compound had become largely ineffective, however. “Should they [terrorists] even be able to access the materials, frankly, it would likely be more of a threat to them than anyone else,”US Defense Department spokesman Rear Admiral John Kirby told Reuters last July.