You are here: Home / West Asia / Islamic State has followers in Maldives and Sri Lanka 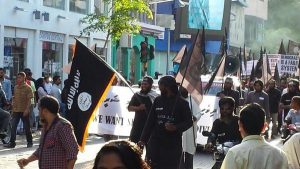 UN report – Analytical Support and Sanctions Monitoring Team – saying the terror group Tehrik-e Taliban Pakistan (TTP), responsible for more than 100 “cross-border” attacks within three months last year, oversaw a “reunification” of splinter groups that took place in Afghanistan and was moderated by al-Qaeda, a development that was expected to increase the threat to Afghanistan and the region, like reported by menafn.com.

The 27th report of the Analytical Support and Sanctions Monitoring Team said TTP was reported to have overseen a reunification of splinter groups that took place in Afghanistan and was moderated by al-Qaeda.

“This was expected to increase the threat to Afghanistan, Pakistan and the region,” it said, adding that five entities pledged alliance to TTP in July and August, including the Shehryar Mehsud group, Jamaat

Ahrar, Hizb
Ahrar, the Amjad Farooqi group and the Usman Saifullah group (formerly known as Lashkar-e- Jhangvi). “This increased the strength of TTP and resulted in a sharp increase in attacks in the region,” the report said.
The report added that according to Member State assessments, the TTP fighting strength range between 2,500 and 6,000. The report said that one Member State reported that TTP was “responsible for more than 100 cross-border attacks between July and October 2020.”

Member States also expressed concern at the rising number of ISIL sympathizers in cyberspace in South Asia. The report said that ‘Voice of Hind’, the only regional ISIL English-language outlet, was started in early 2020 and is published regularly, and has followers in the Maldives and Sri Lanka.

The Team continues to study divergent information from Member States regarding ISIL-K activity in South Asia, in close consultation with Member States concerned and other interested parties, the report said.

In June 2020, Shahab al-Muhajir, also known as Sanaullah, was appointed by the ISIL core to lead ISIL-K. The communiqu~CHECK~ announcing the appointment, written in Arabic and translated into Pashto, referred to al-Muhajir as an experienced military leader and one of the “urban lions” of ISIL-K in Kabul who had been involved in guerrilla operations and the planning of suicide and complex attacks, the report said.

According to a Member State, al-Muhajir was also appointed chief of the Al-Sadiq office of ISIL, which covers the “Khorasan” region, including Afghanistan, Bangladesh, India, Maldives, Pakistan, Sri Lanka and the Central Asian States.