You are here: Home / Senza categoria / Islamic State has carried out successful attacks across the world despite the Mosul campaign

2016 was another year of conflicting narratives regarding the Islamic State (IS). On one end, the Obama administration continued to mischaracterise the threat, painting a picture of IS in retreat amid ongoing attacks from coalition and Iraqi forces. On the other end, there was reality, which spoke loudly to anyone willing to listen, according to ibtimes.co.uk 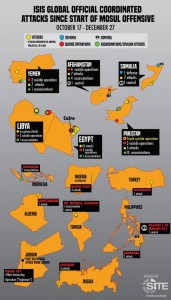 IS, though suffering recent losses of urban strongholds in Iraq and Libya, remains an enduring military presence in the Middle East. Adding to its military threat is a global network of supporters and lone wolves, performing attacks in an array of countries through both direct coordination with IS and by their own means.

Despite some assessments that IS media is becoming less effective, it remains strong: published in a dozen languages, with a new centralised magazine and videos providing guides for attacks, among other matters.

As was the case in previous years, this dangerous material is not only released on social media, but floods it. The releases are just as gruesome as ever, with recent ones showing immolation of Turkish soldiers and children killing prisoners, among other acts.

This media operation considered, it is not surprising that the IS Amaq News Agency and Naba newspaper have claimed 19 IS-inspired attacks around the world since June (the very month the White House told us that IS morale was “plummeting“).

These attacks were in countries such as Russia, Kenya, Canada, France, Germany, Belgium, and the United States. These were carried out by individuals who, though not coordinated with IS, operated in the group’s name, killing more than 150 people and injuring hundreds more. Even Brazil faced a threat from 12 IS-inspired suspects who were arrested by authorities as they planned an attack at the Rio Olympics.

Many of these followed IS’ suggested methods of attack, as communicated via social media. For example, Abdul Razak Ali Artan’s November 28 attack at Ohio State University – made by first driving a car into a crowd of people and then striking others with a knife – rang of blade and vehicular attack instructions given in an IS video and two issues of its “Rumiyah” magazine. The December 19 Berlin attack, when IS-pledged attacker Anis Amri drove a truck into a busy Christmas market, likewise demonstrated these proposed tactics.

Coalition Ambitions for Mosul and Raqqa

A good example of IS’ persistence in Syria and Iraq is the Mosul Offensive. Since IS seized Mosul in 2014, the city has functioned as the group’s de facto capital in Iraq, giving it both symbolic and strategic value. Following Iraqi and coalition forces’ momentous retaking of Ramadi in December of 2015 and Fallujah in June of 2016, Mosul has stood as IS’ last remaining major urban stronghold.

In October, after two years of preparation, Iraqi and allied forces began a massive offensive on the city, raising hopes for a turning point in the fight against IS.

In a December 14 teleconference, Lieutenant General Stephen Townsend, commander of the US military’s operations against IS, claimed a “remarkable reversal of fortune since 2014,” vaguely touting the “striking [of] ISIL’s military capacity” and financial operations. He also stated that the US-led coalition’s “main effort remains to liberate ISIL’s twin capitals of Mosul and Raqqa” (the latter referring to IS’ de facto capital in Syria, which coalition forces seek to likewise liberate).

But the plan didn’t go as expected.

In Iraq, IS has endured the ongoing Mosul offensive, which appears extremely lagging (if not failing). And just this month in Syria, IS regained control of Palmyra, marking a symbolic victory for the group after it had lost the city to Syrian regime forces in March of 2016. Following this victory, IS’ Amaq News Agency published photos and a video of fighters surveying war spoils, which reports have indicated to include Russian anti-aircraft missiles.

The group has also continued heavy activity around Homs, primarily around the Tiyas Airbase (the largest airbase in Syria), and the recently captured Sharifah village.

During the same time, IS has also continued to execute sophisticated operations outside of Iraq and Syria. Since the start of the Mosul offensive, IS claimed coordinated and military-style attacks in 14 other countries – spanning those with established IS military presences such as Libya, Yemen, Afghanistan, and Pakistan, as well as others such as Turkey, wherein significant IS operations are more rare.

Such attacks have utilised IEDs, suicide operations, military clashes, and assassinations, among other methods and resources. IS even executed its first coordinated attack in Jordan on 18 December, with a suicide operation on Jordanian security forces in Karak. Among those killed was a Canadian tourist.

Since the offensive’s start, IS-inspired attackers have also continued to perform operations throughout the world in the United States, Sweden, Russia, Kenya, and Germany.

Despite some victories and killings of top IS leaders including Abu Muhammad al-‘Adnani, Umar al-Shishani, and Abu Mohammed al-Furqan that took place in 2016, the overall situation is sobering to wishful thinkers hoping that IS would soon be dismantled.

Politics aside, it is an undeniable fact that the Obama Administration’s war on IS has been a failure. Since the president’s initial assessment of the group as a mere “JV” team, to the failed train-and-equip program, all the way to his current assessment that his team has made “the best decisions” available to them, 2016 was a final chapter in this administration’s profound lack of understanding in taking on the largest terrorist threat of our time.

IS is more than an organisation and a few cities in Iraq or Syria. It is a global military, media, and ideological phenomenon that needs to be addressed as such.

Let us hope that the incoming presidential administration will have a different approach —acknowledge and study the threat instead of dismissing or misrepresenting it. Hopefully, Trump and his cabinet members will begin asking the right questions: Why are thousands of “normative” children leaving everything behind to join IS on battlefronts, or wish to die for Abu Bakr al-Baghdadi? Where is IS’s propaganda coming from, and how and where is it being spread? What social and political conditions are contributing to the group’s agenda?

The answers to these questions are difficult, but not impossible. Solutions must be much more comprehensive than merely liberating one or two cities, securing one border, or killing a high-ranking individual. Furthermore, on social media, they won’t point toward deleting one social media account, or helping a social media platform clean up its content.

Effectively countering IS will require an approach that values and effectively utilises public-domain intelligence; effectively monitoring and rapidly adapting to jihadist recruitment trends and methods; and understanding how media releases make it from IS all the way to a vulnerable recruitment prospect’s computer screen.