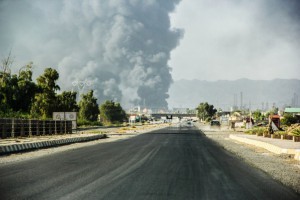 The jihadist group claimed it broke in to the Baiji oil refinery but the Iraqi army said the site, which has been the scene of fierce battles since the IS group swept across the region last year, remained under its control.

“Today Daesh (an Arab acronym for IS) launched an attack against the Baiji oil refinery,” said a major general from Salaheddin province, in which Baiji is located.

He described the attack on the refinery, which lies around 200 kilometres (120 miles) north of Baghdad, as “the fiercest since we broke the siege a few months ago.”

The officer and other military sources said the attack was launched around 7:00 am (0400 GMT) and led to clashes.

He said IS group militants attacked the large complex from three fronts: Al-Bujwari village to the south, the housing compound for refinery employees to the west and one of the smaller plants producing derivatives to the east.

“Three suicide attackers were able to reach the entrances of the refinery. Two were killed but one managed to blow himself up,” the army officer said.

He said that the Iraqi forces protecting the refinery regained control of the entrances and that the entire site was now under government control.

The IS group released pictures showing convoys of their Humvees attacking the refinery perimeter and of fighters apparently inside the limits of the site.

The army officer said 20 jihadist fighters were killed in raids by the Iraqi air force, although that figure could not be verified.

“Daesh is trying to send the message that they are everywhere but in fact they are defeated and cannot advance,” he said.

The Islamic State group launched a massive offensive on northwestern Iraq in June and swept across much of the country’s sunni Arab heartland within days.

Counter-terrorism and other forces tasked with protecting the vital refinery held out and remained besieged for months.

An Iraqi operation, backed by air strikes from a US-led coalition, eventually broke the siege in October and retook the city, which lies just south of the refinery.

The jihadists have since wrested the city back.

Following their victory in Tikrit earlier this month, government forces will have to re-take it once again as they continue to move north towards the main IS hub of Mosul.

The Baiji refinery once produced some 300,000 barrels of refined petroleum products per day, meeting 50 percent of the country’s needs.