You are here: Home / MidEastGulf / Islamic State gaining ground on Golan border and Free Syrian Army on verge of collapse in southern Syria 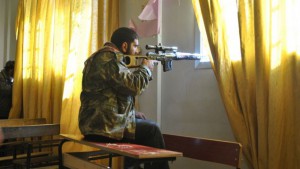 As Russian airstrikes on Wednesday and Thursday targeted rebel groups in central and northern Syria, many of them reportedly unaffiliated with the Islamic State, Islamist groups in the south are growing stronger, with IS fighters now operating openly near the border with Israel, an opposition spokesman said on Thursday.

Speaking to The Times of Israel from Jordan, where he serves from within the joint Western-Arab command center in Amman known as MOC, the spokesman of Free Syrian Army units active in the provinces of Daraa and Quneitra said that an estimated 500-700 Islamic State fighters are currently active in the towns of Jamlah and Ash-Shajarah, adjacent to the Israeli border in the southern Golan Heights.

Further east, moderate forces are attempting to push back IS fighters trying to occupy al-Lajjah, an area north of the town of Basr al-Harir.

Western training for moderate rebel fighters in Jordan has not taken place in five months, he added, and no ammunition or weaponry has reached the Free Syrian Army on the southern front in three months.

“The current situation is very bad,” the spokesman said. “No battles are taking place [with Assad forces] in our sector because there’s no ammunition.” While the Assad regime is maintaining its hold on the city of Daraa, near the Jordanian border, the surrounding villages are largely held by rebel forces.

In addition to the decline in ammunition, salaries have also been cut by 60 percent to Free Syrian Army fighters, the spokesman noted. An average FSA combatant earns just $70 a month, as compared to $300 earned by Islamist Nusra Front combatants or the salary of IS fighters, which can reach $500. The latter two organizations are classified as terror groups by the US and other Western states.

“The more Western states fall short in providing support to us, the more they help ISIS and Nusra,” he said. “If the donor states do not take a firm stand, within two months most fighters in the southern front will switch to Nusra or ISIS. The lack of salaries and ammunition is humiliating them, and they won’t take it much longer.”

The Times of Israel could not independently confirm the information provided by the FSA spokesman.

The spokesman speculated that the cut in funds was a Western reaction to the failure of moderate rebels to capture the city of Daraa and complete a military drive northward towards Damascus as part of Operation Southern Storm in June and July this year.

“The young fighters are attracted by these organizations, which claim to represent religion,” he said. “They believe that anyone speaking for religion is truthful and wants to liberate the country, when in fact the opposite is true. They merely use Islam as a guise but have no connection to it.”