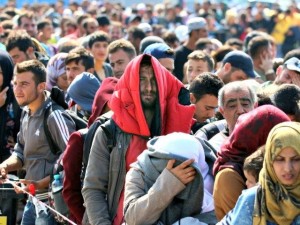 The Islamic State has planned to infect refugee flows to the West with mass killers, and it has had some violent successes, like reported by washingtontimes.com.

The CIA said last year that the terrorist group’s official strategy is to hide its operatives among refugees entering Europe and the United States via human flows out of the Middle East and North Africa.

The Islamic State, also known as ISIL and ISIS, has inspired followers to commit atrocities in San Bernardino, California; Orlando, Florida; and the Fort Lauderdale airport in Florida. Scores of U.S. residents have been charged with or suspected of providing material support to the Islamic State. Some have left the U.S. to commit war crimes in Syria and Iraq.

As President Trump places a 120-day ban on immigration from what he considers high-risk Muslim-majority countries, the history of the mass migration shows that some took part in the Nov. 13, 2015, massacre in Paris — two posed as refugees from Syria — and the Christmastime truck carnage in Berlin.

Two of the airport and Metro attacks in Brussels last year had fought in Syria and gained entry back into Belgium.

The German press has reported refugee knife and ax attacks on innocents.

“ISIS has claimed on multiple occasions the intent to infiltrate terrorists into the refugee flow,” said Robert Maginnis, a retired Army officer and terrorism analyst. “One can argue that the Tunisian who drove the truck into the Berlin Christmas market was an immigrant tagged as influenced by ISIS. Certainly ISIS will do whatever it can to infiltrate those coming to this country as well. Time will tell whether they are successful, and meanwhile we are vulnerable.”

In August, the deputy head of Bavaria’s intelligence service told the BBC that the Islamic State has injected “hit squads” via migrants entering Germany.

“We have to accept that we have hit squads and sleeper cells in Germany,” said Manfred Hauser, vice president of the Bavaria region’s intelligence-gathering agency, BayLfV.

“We have substantial reports that among the refugees there are hit squads. There are hundreds of these reports, some from refugees themselves. We are still following up on these, and we haven’t investigated all of them fully,” Mr. Hauser said.

Months earlier, Hans-Georg Maassen, chief of German domestic intelligence, told ZDF public television that officials in Europe have “seen repeatedly that terrorists are being smuggled in, camouflaged as refugees. That is a fact that security authorities must always see to recognize and identify.”

In June, CIA Director John O. Brennan told a Senate committee: “We judge that ISIL is training and attempting to deploy operatives for further attacks. ISIL has a large cadre of Western fighters who could potentially serve as operatives for attacks in the West. And the group is probably exploring a variety of means for infiltrating operatives into the West, including refugee flows, smuggling routes and legitimate methods of travel.”

Shortly before he left his post as NATO commander, Air Force Gen. Philip Breedlove said in March that the Islamic State had injected 1,500 fighters into Europe.

“I think every refugee flow needs to be looked at with an eye towards it could be taken advantage of by those who seek to do us harm,” Gen. Breedlove told the Senate Armed Services Committee.

Committee Chairman John McCain, Arizona Republican, responded, “Logic then compels us to assume the risk of attacks on the United States of America or European countries is significantly increased.”

James R. Clapper, as director of national intelligence, in 2015 called the infiltration of refugee flows “a huge concern of ours.”

That year, a Syrian Islamic State operative told Britain’s Daily Express that more than 4,000 fighters had already been smuggled into Europe.

Also that year, FBI Director James B. Comey talked about the difficulty of vetting Syrian refugees for which the bureau had no official data.

“If we don’t know much about somebody, there won’t be anything in our data,” Mr. Comey said. “I can’t sit here and offer anybody an absolute assurance that there’s no risk associated with this.”

This weekend, an Islamic State follower posted a message on the Telegram app that said Mr. Trump was wasting his time by blocking refugees from Syria.

“Trump is preventing the entrance of the citizens of [seven] countries to protect America from terrorism,” said the message captured by the Middle East Media Research Institute. “Your decision will not do anything to prevent the attacks; They will come from inside America, from Americans born in America, whose fathers were born in America and whose grandparents were born in America.”